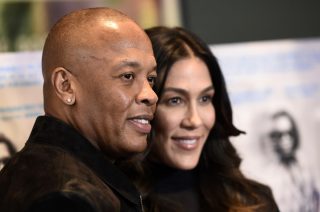 Dr.Dre’s wife Nicole Young might be the new member of the billionaire divorcée club. Nicole filed for divorce in June after 24 years of marriage citing irreconcilable differences. On Tuesday she asked the court to set a separate trial date to challenge the “validity and enforceability” of the premarital agreement between her and Dre after saying he “pressured” her to sign their prenuptial agreement and then “tore up” the document.  “His net worth is estimated to be in the ballpark of $1 billion dollars, which was largely earned during the parties’ approximate 24 year marriage,” the filing obtained by the Daily News states.

“Around two to three years after they were married, Andre tore up the parties’ premarital agreements in Nicole’s presence,” the filing prepared by Nicole’s high-powered divorce lawyer Samantha Spector read. When it comes to divorce, most men pay a hefty price. Between splitting assets, alimony, and child support the bill rises exponentially. Does the validity of this prenup still stand or will he pay this tab?