A Kansas City Woman Reads The Entire Board Of Police Commissioners During A City Board Meeting! 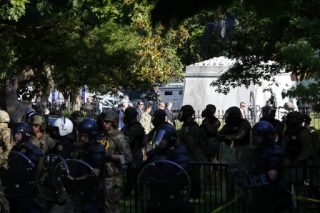 Keiajah Brooks, known as @kjg,brks on Instagram went viral this week after a video surfaced the internet of her reading the entire Kansas City Board of Police Commissioners for filth during their city meeting.

“Fair warning, I’m not nice and I don’t seek to be respectable” is what she started her speech with and listeners knew it was up from there. In four short minutes, she individually called out each member of the board and their shortcomings as she explained how racist and unjust their police board is.

“Stop using black children as photo opportunities because they’re cute now but in 10 years they’re black male suspects in khaki pants and red shirts” she stated as she began her rant. She calls out a Pastor who is on board for being self-preserving and condoning the unjust acts of the police board. She explained how each member has blood on their hands and are completely disconnected from the community.

She ended her rant with a bible verse saying “What does it profit a man to gain the whole world but forfeit his soul?”. The video quickly spread as many social media users reposted the young lady. On her social page, she reveals the faces of the board from a different view in the video.

The Kansas City community made it a goal to vote their police chief out due to their police using excessive force and the number of black men who were killed in their hands. Many community activists including Brooks believe the complaints were mishandled and wanted to use the meeting to express their experiences.