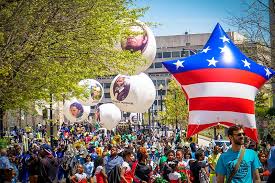 It’s a holiday today here in the District of Columbia. April 16th marks the annual Emancipation Day celebration in the city. It’s the anniversary of the Compensated Emancipation Act of 1862 that ended slavery in the city. This act freed 3,100 slaves 8 months before the Emancipation Proclamation freed slaves in the South. The act also gave the freed men and women money to out of the region or country if they chose to. DC was the only part of the United State to have compensated slave owners for freeing their slaves.

Over the weekend the annual Emancipation Day parade. DC city government is closed today in honor of the holiday.