If you Live in Missouri and want to vote for Kanye West it might be time to explore other options. On Tuesday John R. Ashcroft, Missouri’s Secretary of State took to Twitter letting Kanye and the rest of the world know he does not have the prerequisites to run as an independent candidate. 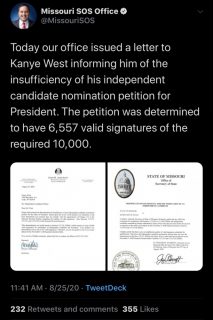 Ashcroft wrote, “Today our office issued a letter to Kanye West informing him of the insufficiency of his independent candidate nomination petition for President. The petition was determined to have 6,557 valid signatures of the required 10,000.”

Missouri is now the third state to remove West from the ballot. Earlier this month New Jersey and Illinois removed the presidential candidate for having an inadequate amount of valid signatures.