The Officer Who Shot Rayshard Brooks Is Suing Atlanta 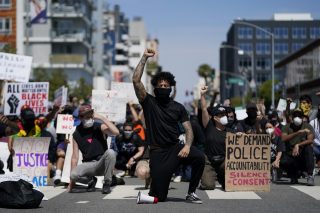 Garrett Rolfe, the former Atlanta police officer who fatally shot Rayshard Brooks has filed a lawsuit naming Mayor Keisha Lance Bottoms and Atlanta Police Chief Rodney Bryant as defendants. He demands to be fully reinstated with back pay. The 27 year old currently faces 11 charges- 5 counts of aggravated assault, 4 counts of violation of oath, damage to property, and felony murder. Rolfe was fired the very next day after the leaked footage on social media caused a national uprising. The resignation of Atlanta’s police chief, mass protests in the Georgia capital, and various twitter hashtags amid the killing of George Floyd in Minneapolis caused Rolfe’s partner, Devin Brosnan, to be placed on Administrative leave and later charged in the incident.

Authorities say his confrontation with Brooks began around 10:30 p.m. on June 12, when officers Brosnan and Rolfe arrived at the Wendy’s in south Atlanta to find the 27-year-old asleep in a car blocking the drive-thru lane.

According to body cam footage, the officers calmly spoke with Brooks for 27 minutes, asking him if he had been drinking. But when they conducted a breathalyzer test on him, finding Brooks was above the blood-alcohol limit, he resisted arrest. A struggle ensued before Brooks grabbed Brosnan’s stun gun, according to the video footage. When Brooks got up and ran away he turned and fired the Taser towards Rolfe—who then shot Brooks twice in the back.