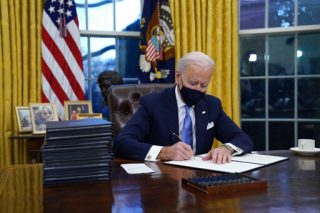 Joe Biden is following through immediately after inauguration with changes to previous policies.

It’s been seven days exactly since he’s been put in office and has signed four executive orders in efforts to advance the country and the racial divide. He is aiming to fully fulfill his campaign promises and place new orders above those set to hold individuals back.

“Those eight minutes and 46 seconds that took George Floyd’s life opened eyes to millions of Americans and millions of people all over the world. It was the knee on the neck of justice and it wouldn’t be forgotten” says Biden in a brief statement. He also made comments about the riot that occured at the Capitol a few weeks ago stating now is the “time to act. It’s time to act because that’s what faith and morality calls us to do”.

The agenda Biden plans to follow has already been pushed through the Senate and preparations have already begun. Sources say, the Trump case may start an uproar causing Biden to race against time and resources. The trial date is February 8th, 2021 and our President says it absolutely has to happen despite there being concerned that this may hinder progress in order for legislation to tackle the pandemic in an efficient way.

One order is looking at unfair house under Trump administration with the Department of Housing and Urban Development. Another order is planned to direct the federal government to not renew contracts with private prisons. The third order relates to tribal governments and the fourth is the fight against xenophobia. We will update the site with more to come!