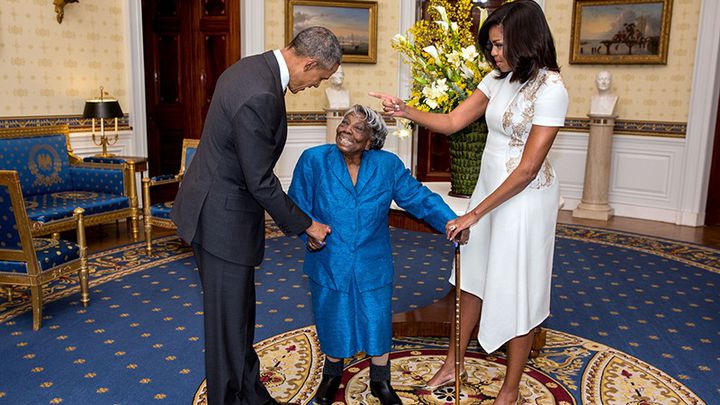 Washington, D.C. (Tuesday, November 14, 2022) – Virginia McLaurin affectionately known as “DC’s Dancing Grandmother,” died today surrounded by family members and friends at her Olney, Maryland home.  Ms. McLaurin was 113 years old.  She moved to Maryland in 2019 so family members could help care for her.

McLaurin made international headlines back in February 2016 after a video of her dancing with President Barack Obama and First Lady Michelle Obama went viral during a visit to the White House.  At that time, she was awarded a service medal  during an annual White House Black History month event.

A GoFund has been set up to help family members pay her final arrangements.  https://gofund.me/521aac66 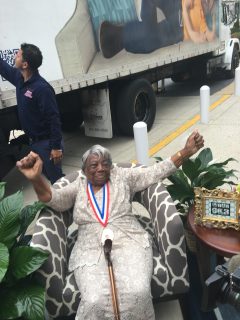 Virginia McLaurin was born March 12, 1909.  She was a tireless volunteer with the United Planning Organization (UPO) as part of their Foster Grandparent program working with youth at C.  Melvin Sharpe Health School until its closing in 2015.

She married the late Marshall McLaurin at age 14. They had two children, Ida Mae and Willie McLaurin. While raising her young children she worked in the cotton and peanut fields to help support her family. The young family moved to Laurinburg, NC where she worked as a domestic and nannie. Tragedy struck when her husband was killed and at age 17 she was left to raise her small children alone.

The children’s grandparents briefly cared for her children while she relocated to her sister’s home in Washington, DC to start a new life for her family. She secured employment as a domestic/nannie with the families of two DC physicians and brought her children to DC. During this period she assumed the care of a third child Felipe Cardoza age 3 when his single father remarried and the new wife did not want the child. She legally adopted Felipe it at age 14. At age 55 she changed careers and worked as a seamstress for a small local dry cleaningbusiness where she alter clothes, sewed on military chevrons etc. Following her second retirement she joined the United Planning Organization Foster Grandparent Program in October, 1994 and served the children of the District of Columbia for Twenty four years.

She is always willing to share a laugh or a story of days gone by. Grandma Virginia McLaurin exemplifies the spirit of volunteerism in every step she takes and shines a bright light on how volunteerism is good food for the soul, spirit and mind.

The UPO Foster Grandparent Program highlights the best of the human spirit, the best of public private partnership and great impact of federal dollars in addressing local problems with local solutions. The War on Poverty is not over but we relish the small victories of volunteer soldiers like Grandma Virginia McLaurin on the educational battlefield.