(Monday, December 13, 2021) – The devastation continues across parts of the Midwest and South as the full extent of the death and damage become more apparent.  In Kentucky alone, Governor Andy Beshear is confirming 64 deaths across his state.  The governor says that number is likely to go higher and adds it could be weeks before a total fatality count is clear. 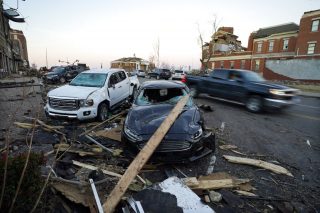 As many as 105 people are unaccounted for as of Monday morning.  “We’re now on Day 3 of responding to the worst tornado event in the history of our commonwealth,” said Beshear as he briefed reporters Monday morning.  The victims range in age from 5 months to 86 years.

A majority of the deaths were reported in Graves County, which is where Mayfield is located and is the site of that candle factory where the roof was ripped off.

Meantime, more than 25k homes in Kentucky are without power and thousands more are without water or heat.  President Biden is promising immediate federal help and plans to tour impacted areas Wednesday.