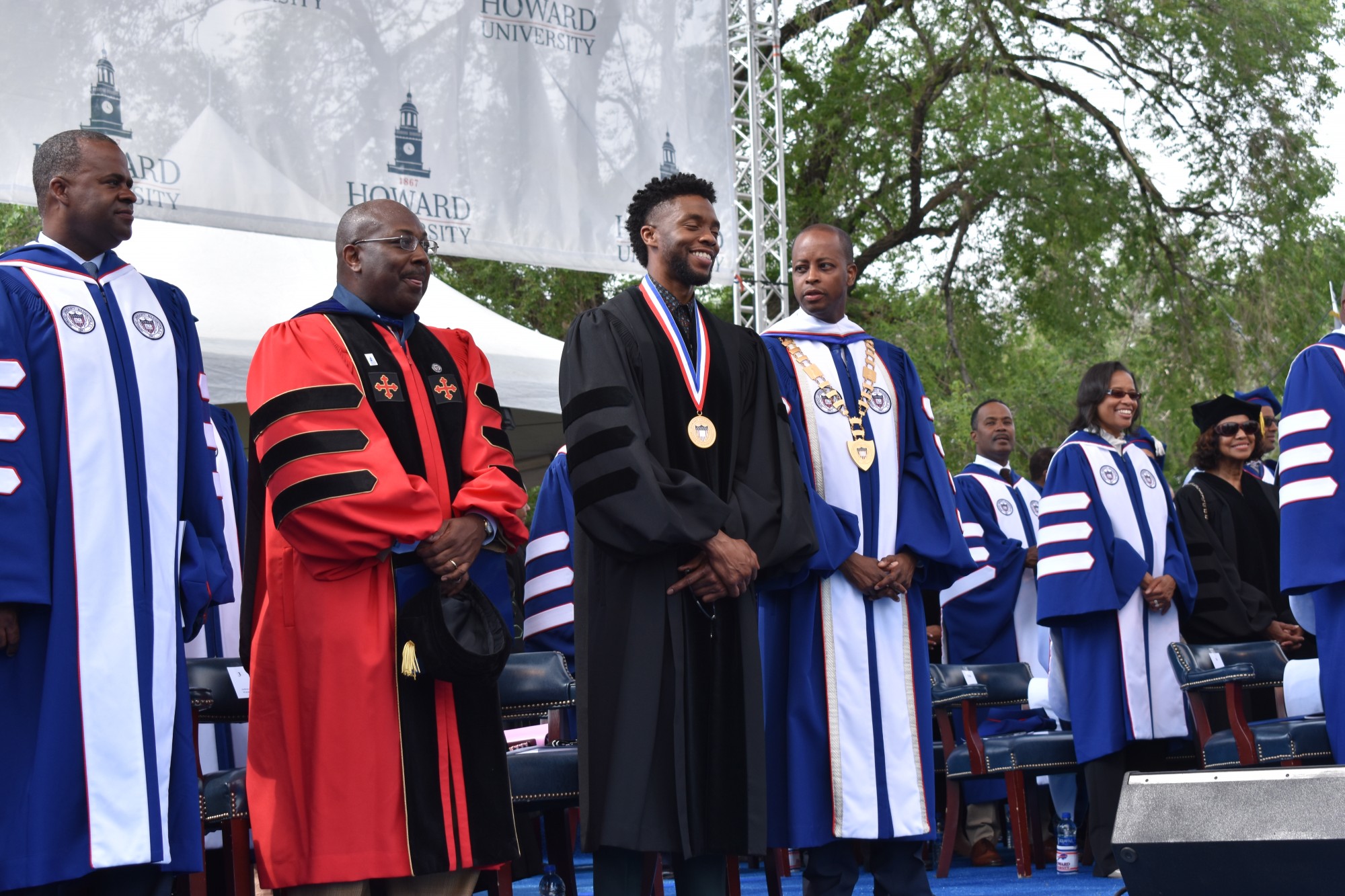 It is with profound sadness that we mourn the loss of alumnus Chadwick Boseman who passed away last night after a long private battle with colon cancer. Our thoughts and prayers are with his family and friends during this difficult time.

We were honored to have Boseman return to campus to serve as our commencement speaker in 2018. The campus was electric as our own native son took the stage fresh off the blockbuster hit of Black Panther. In a sense, the real T’Challa had returned home to the real Wakanda – The Mecca.

During his remarks, Boseman shared his journey of challenges and successes in navigating the Hollywood entertainment industry. He described how he chose to speak out when asked to play characters that belittled the image of the Black man. He intentionally chose roles that reflected the vision of his people that he wanted to see on screen. Boseman spoke fondly of his days at Howard, calling it “a magical place” and saying, “when you have reached the Hilltop and you are deciding on next steps, you would rather find purpose than a career. Purpose is an essential element of you that crosses disciplines.”

It was Boseman’s desire to see the students of Howard achieve greatness. Together, he and I shared many conversations preparing plans for a project that would bring him back to campus, which was very close to being ready to announce. Although now he will not be here to witness the harvest of the seeds he planted, we will continue to water and cultivate them in his memory.

Boseman was a man of grace and humility. A deep thinker who had a deep passion for writing and uplifting his people. A staunch supporter of social justice, he did not shy away from using his voice in service to those without one.  We now know he was in a fight for his life yet continued creating magic for all of us without missing a beat.  He lived a full life by the magnitude of his example.  That reality buoys my spirits even in this time of sadness. One of the last times I saw him was at dinner with his mentor, fellow alumna and former board of trustee member, Phylicia Rashad. That interplay captured the essence of Howard University and our truth and service. He always appreciated the opportunity she made possible for him and she remained a source of support!

A native of South Carolina, Boseman graduated from Howard University and attended the British American Dramatic Academy at Oxford, after which he began his career as an actor, director and writer. His breakout performance came in 2013 when he received rave reviews for his portrayal of the legendary Jackie Robinson in Warner Bros’ “42” opposite Harrison Ford.  Boseman received the 2014 CinemaCon Male Star of Tomorrow Award, was named one of the Top 10 Best Movie Performances of 2014 by Time Magazine and was awarded a Virtuous Award from the Santa Barbara International Film Festival for his portrayal of James Brown in Universal Pictures’ “Get on Up.”

He previously starred in the title role of Open Road Films’ “Marshall” alongside Josh Gad. The film tells the story of Thurgood Marshall, the first African American Supreme Court Justice, as he battles through one of his career-defining cases as the Chief Counsel to the NAACP. His other feature film credits include: the revenge thriller “Message from the King,” Summit Entertainment’s “Draft Day” opposite Kevin Costner, independent psychological post-war drama “The Kill Hole” and Gary Fleders’ drama “The Express.”

Although he was only 43, Boseman leaves to us a remarkable body of work portraying Black men of honor, purpose and dignity: Jackie Robinson, Thurgood Marshall (Law ’33), and James Brown. This young man’s incredible talent will forever be immortalized in those performances and through his own personal journey from student to superhero!

Love is Life and he had an abundance of both. Boseman reminds us that the quality of life is not measured in time, but rather it is measured in how well we live it and what we prioritized. He prioritized his wife, his family, his friends, his craft, and loving others. The characters he portrayed will be celebrated but his greatest gift to us was himself.

Excellence in Truth and Service,