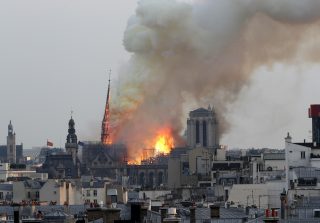 One of Paris’, in fact, the world’s most famous structure is no longer what it used to be. Fire ripping through the Cathedral of Notre Dame today, leaving only the outer shell of the 850-year-old building.    French President Emmanuel Macron the cathedral will be rebuilt. Speaking outside the iconic landmark, Macron said that thanks to the efforts of firefighters, the facade, including the two bell towers, have been saved.  To help rebuild the cathedral, Macron pledged to launch an international fundraising campaign. The fire has been burning for hours and has resulted in the collapse of the spire and the roof of the building in the center of Paris.  Authorities in Paris have not discovered a cause for the fire, though there is speculation that it may be linked to the renovation of the cathedral.