WASHINGTON (AP) — House Republicans flailed through a second day of multiple balloting Wednesday, unable to elect Rep. Kevin McCarthy as House speaker or to come up with a new strategy to end the political chaos that has tarnished the start of their new majority.

For a sixth time, Republicans tried to vote McCarthy into the top job as the House plunged deeper into disarray. That came moments after the fifth showed Freedom Caucus conservative holdouts still refusing to support him, unchanged from the previous time around and leaving him far short of the 218 votes typically needed to win the gavel.

Rep. Lauren Boebert, a firm Colorado conservative, nominated Rep. Byron Donalds, R-Fla., the chosen protest candidate of the day— and called for former President Donald Trump, the conservatives’ hero, to tell McCarthy, “`Sir, you do not have the votes and it’s time to withdraw.” 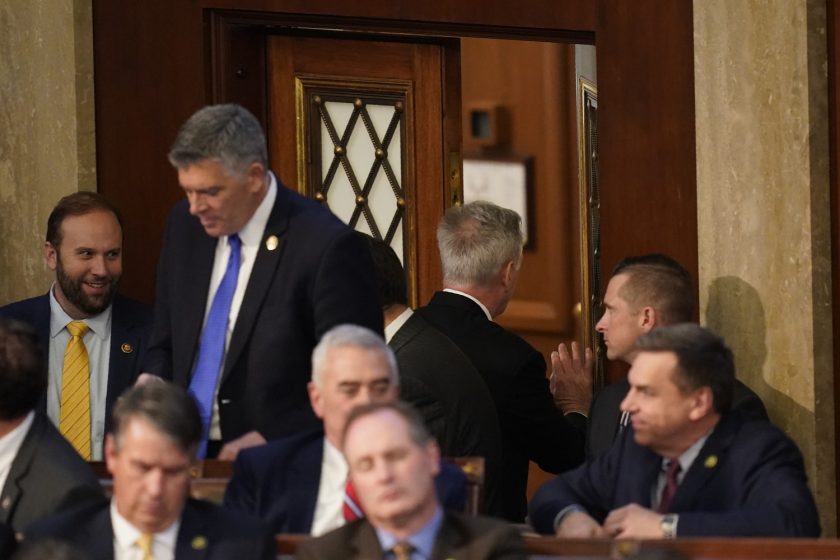 Rep. Kevin McCarthy, R-Calif., walks out of the chamber during a sixth round of voting as the House meets for a second day to elect a speaker and convene the 118th Congress in Washington, Wednesday, Jan. 4, 2023. (AP Photo/Alex Brandon)

Earlier Wednesday, Trump had done the opposite, urging Republicans to vote for McCarthy. “Close the deal, take the victory, he wrote on his social media site, using all capital letters. “Do not turn a great triumph into a giant & embarrassing defeat.”

The House gaveled in at noon, but no other work could be done — swearing in new members, forming committees, tackling legislation, investigating the Biden administration — until the speaker was elected.