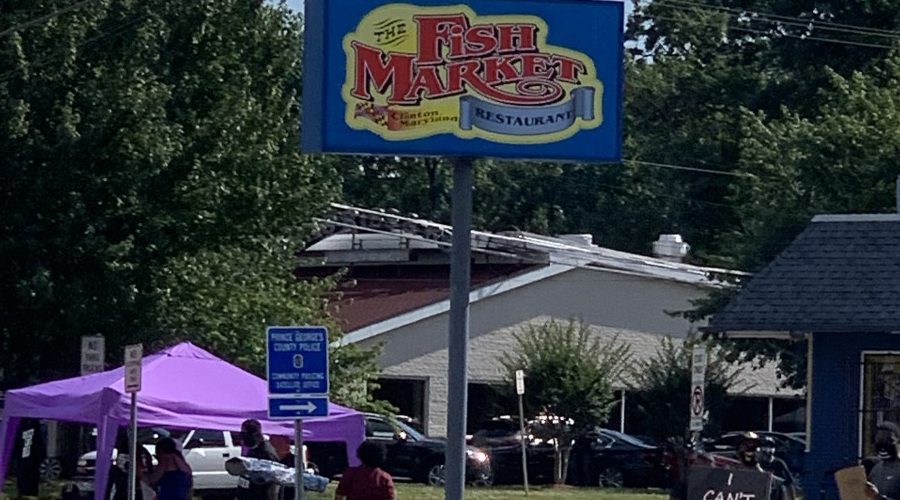 Clinton, Maryland (Tuesday, June 30, 2020) –  Dozens of protesters are vowing to keep up their pressure to close the Fish Market Restaurant in Clinton, Maryland. Tuesday evening nearly 100 demonstrators, many carrying signs and wearing t-shirts reading “I Can’t Breathe,” picketed outside the popular seafood restaurant to prevent any customers from going it. 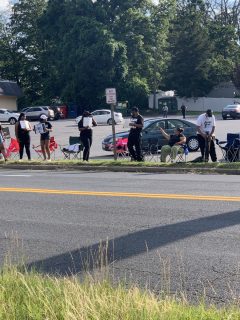 Restaurant owner Ricky Giovanni is being blasted for what protesters call a pattern of racist comments spanning years.  The latest one has many customers fueling.  Last weekend, Darryl Collins, who was a first time customer, was initially denied entrance to the Fish Market because he was wearing a “I Can’t Breathe” t-shirt.   “I was shocked and saddened that in this racially sensitive 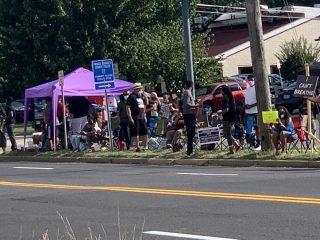 time we are living in that he would say that to me,” said Collins.

“The owner came over to me asking why do I have that shirt on and that I could not come in his restaurant with it on.”  The “I Can’t Breathe” statement has become a rallying cry for protesters across the country because it was among the last words George Floyd uttered before he died under the knee of a Minneapolis police officer.

The co-owner of the Fish Market issued an apology on Facebook.  Sherry Giovanni said she was shocked and embarrassed by her husband’s behavior.  She went on to blame mental illness and alcohol.  But several frequent patrons and workers say racist comments are not new for Ricky Giovanni.  The Fish Market has been a popular spot for decades in Prince George’s County.   Walter Cosby has been one of the full-time musicians at the Fish Market.  “I’ve worked their since 2006 and I have heard Ricky make numerous racist, homophobic, and other remarks that would be offensive to women,” said Cosby.  “We often just brushed it off by saying that’s just Ricky.  But in this new environment people can no longer ignore it.”  Cosby says he’s now decided to quit the Fish Market.

Protesters want the restaurant to close permanently.  They are promising to keep coming back and calling on other customers to boycott the restaurant.  One of the organizers, Carla McClinton says efforts are underway to even purchase the restaurant, but at the very least to force the owners out of business.  “We are saying enough is enough.  We are not going to take those racist comments anymore,” added McClinton.

WHUR tried to get a direct comment from Ricky Giovanni of the Fish Market.  We made several phone calls.  But there was no answer and the restaurant’s voicemail was full.