Washington, D.C. (Sunday, July 18, 2021) – The Nationals Ball Park was evacuated last night following a shooting outside the stadium.  D.C. police say suspects in two separate vehicles were firing at each other and hit an innocent bystander outside the park.  The two suspected gunman are said to be in custody after seeking treatment at a nearby hospital.  A female fan is expected to survive her injuries.

Police initially said four people were shot. But that number was revised later in the night.  Fans were sent scrambling in the stadium after hearing the gunshots.   They described shear pandemonium as people rushed to find safety, trying to figure out where the gunfire was coming from.

Fans could be seen running and jumping over seats. Some fans on the lower concourse sought safety in the dugouts.  Park officials encouraged people to stay in their seats.  But many failed to heed that message. 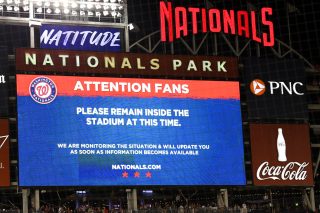 The game between the Washington Nationals and San Diego Padres was suspended.  It has been rescheduled for today at 1:30pm.