“We were very sad to learn of the passing of our dear friend and colleague Jesse Fax.  At WHUR, we consider all who have worked here to be forever family members.  Mr. Fax was a major contributor to the rich history and legacy of WHUR.  Our thoughts and prayers go out to his family and all those who loved him,” said WHUR General Manager Sean Plater.

Fax was a mainstay at WHUR in the late 1970s and 1980s.  He could be heard weekday mornings from 6 a.m. to 10 a.m. helping to keep listeners informed, entertained, and engaged about the latest happenings locally, nationally, and globally.   An avid reader and movie buff, Fax was a story teller and would have his listeners glued to the radio as he shared his views on music, politics, relationships, and the latest Hollywood movie.

A native Washingtonian and graduate of Howard University, Fax loved learning and teaching.  You would often find him “holding court” with a small crowd of people standing around him to simply absorb the wisdom he would impart on anyone listening.  His keen sense of business and radio eventually propelled Fax to the position of Program Director where he managed all of the on-air talent and placed WHUR on the pathway to broadcasting excellence.

Fax was known for his interviewing techniques too.  He would chat it up with all the stars like they were old friends, including Michael Jackson, Stevie Wonder, Parliament Funkadelic, Marvin Gaye, and many more.  He also had a way with the politicians too.  DC Mayor Marion Barry was a frequent guest.

Fax would later take his gifts and talents to the education system, which really didn’t su 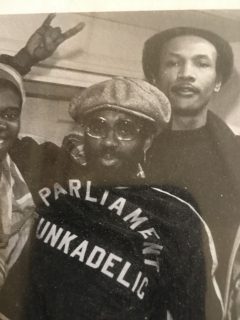 rprise many because he was always teaching.  Fax became an English teacher at Suitland High School and went on to become the assistant principal at Bowie High School where he retired in 2017.

If you really wanted to get Fax talking non-stop, ask him about a Western.  “He knew every scene from every movie ever produced.  His wisdom was vast and legendary.  Plus he just had a commanding voice that made you want to pay attention,” said WHUR producer Bobby Adams.

Jesse Fax gone.  But never forgotten.  Take your forever seat at the Mic our Radio Brother.