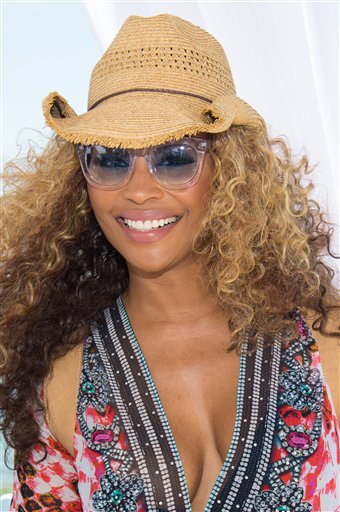 Fox’s Mike Hill proposed to Cynthia Bailey on Friday at the grand opening of her wine cellar, The Bailey Wine Cellar in Atlanta. The couple is engaged after 14 months of dating.

People reports that the ring Hill proposed with is an impressive 5-carat princess cut solitaire ring. Bailey’s daughter Noelle Robinson and Hill’s two daughters, Kayla and Ashley Hill were all in attendance and took part in the proposal. Mike Hill started by proposing a toast, in honor of Bailey’s opening. Kayla then interrupted the speech by handing her father a bottle with a big question mark on it and saying, “No dad, I think you should propose like this!”

CNN reports that Hill then told Noelle that he needed help opening the bottle and she handed him the ring box. She helped him open the box and he got down on one knee in front of Bailey. At that moment, Noelle, Kayla and Ashlee stood behind him holding a heart shaped puzzle together with everyone’s names and the word “family” in the center.

Bailey took to Instagram to react to the engagement and thanked everyone for the well wishes. She also used the hashtag #CHill, which the couple has used in previous social media posts as their trademark.

never give up on love. we are all deserving of the best feeling in the 🌎. trust God & go with your heart. God’s plan, God’s will & God’s speed, not yours. always believe. never stop. never settle. be happy. and grateful. love can show up when you least expect it & in the unlikeliest of places. thank u my friend @iamsteveharveytv. and when it happens, don’t walk, run toward it. and enjoy. life is too short💋 @itsmikehill @noellerobinson @kayylahill @aaashlee @people @annadecodorniuoficial #familia #CHill #love #lifeis2short #believer

In another post, Bailey thanked Steve Harvey who, back in 2018, set the couple up on a matchmaking segment of “The Steve Harvey Show.” Following her divorce from Peter Thomas in 2017, Bailey was ready to find the right person to settle down with. Harvey sent Bailey on three blind dates with eligible bachelors and she ended up choosing Hill as her suitor.

Bailey says, “Love can show up when you least expect it and in the unlikeliest of places.” She also says that when it happens, “run toward it.”

Congratulations to the happy couple!