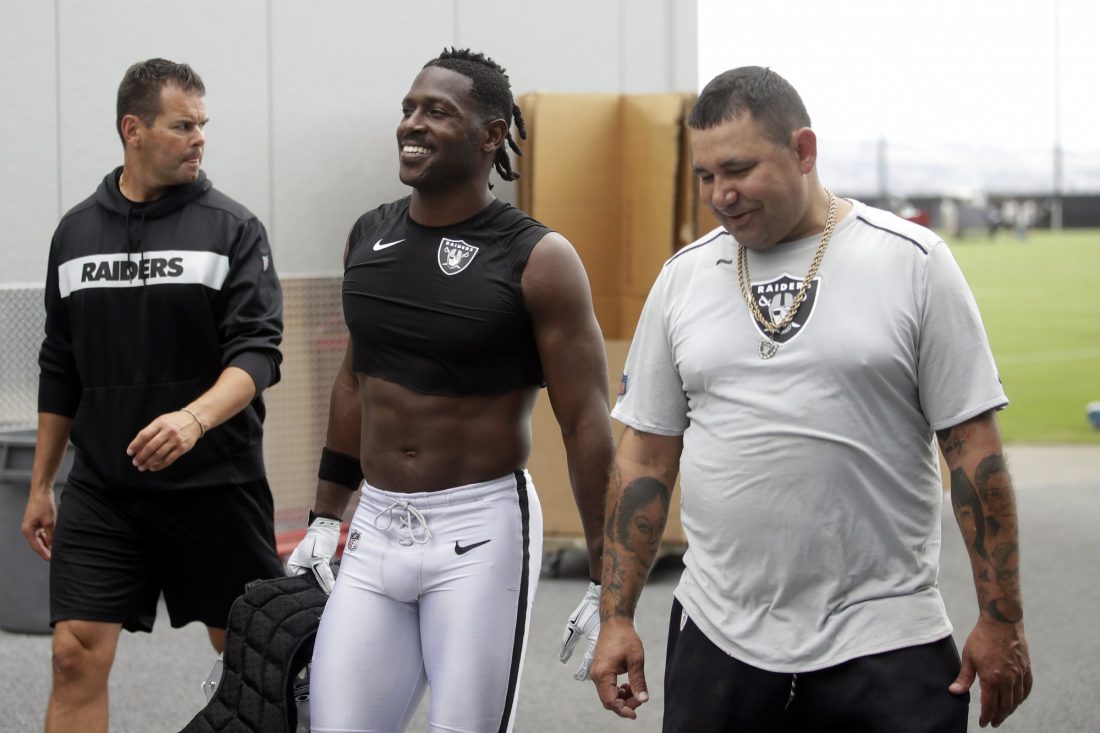 ALAMEDA, Calif. (AP) — Star receiver Antonio Brown practiced in a certified helmet with the Oakland Raiders on Tuesday, two days after being given an ultimatum by general manager Mike Mayock to be “all in or all out.”

“He’s all in, ready to go,” coach Jon Gruden said. “That’s my understanding. Really happy to have him out here. He’s a great player.”

Brown didn’t attend practice Sunday as he worked to find a helmet he was comfortable using and that met safety standards set by the NFL and NFLPA. He lost a grievance last week in which he sought to be allowed to use the Schutt Air Advantage helmet he has worn throughout his career. But the helmet was too old to be certified as safe.

He had hoped to find a newer version of his preferred helmet that could be approved but the one he submitted failed a safety test conducted by the league and union.

He filed a second grievance Monday seeking a one-year grace period, according to a person familiar with the situation who spoke on condition of anonymity because it wasn’t made public. But he is back practicing with the team while that gets resolved.

Brown was not wearing a helmet during the open portion of practice and spent some of the time during stretch in the nearby weight room. But he walked off the field after practice holding a new helmet and Gruden said he’s running well after also missing time with frostbitten feet.

Brown didn’t take part in a full practice during the Raiders’ entire training camp stay in Napa, which wrapped up Monday, missing time because of frost bite on his feet suffered in a cryotherapy accident in France and then over the helmet issue.

That led to Mayock saying Sunday that the Raiders had supported Brown but had “exhausted all avenues of relief.”

“It’s not been a distraction to me at all,” Gruden said. “I hate to break it to anybody but we’ve known what the status is regarding his feet. He just showed up with frost bite. I never had a guy show up with frost bite. Fortunately we got that thing under control. This grievance thing is no laughing matter. It’s something that’s really important to him. There’s nothing wrong in supporting your players on things they believe in. We also understand the league’s position but I’m confident that he’s going to be a heck of a player for us and be ready to roll.”

Brown had 686 catches and 9,145 yards receiving the past six seasons in Pittsburgh, the best marks ever for a receiver in a six-year span. But he still wore out his welcome with the Steelers after leaving the team before a crucial Week 17 game last season and Oakland was able to acquire him in March for the small price of third- and fifth-round draft picks.

The drama that surrounded Brown in Pittsburgh didn’t stop upon his arrival in Oakland even though he was given a hefty raise with a three-year contract worth $50.125 million.

Brown arrived at camp with the frost-bitten feet, sending him to the non-football injury list. He was activated on July 28 and participated in parts of two practices before leaving for more than a week to get treatment on his feet and to deal with the helmet grievance.