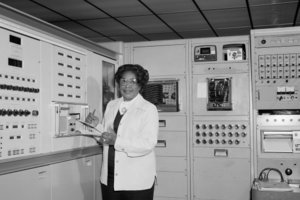 For the second time this month, NASA is honoring one of the pioneering black women from Hidden Figures.
On Friday, the agency will officially rename its Washington D.C. headquarters after Mary Jackson, NASA’s first black female engineer.
Jackson died in 2005 but her granddaughter Wanda will be on hand for the ceremony.
Earlier this week, NASA launched a spacecraft named after Hidden Figures mathematician Katherine Johnson.
Did you ever dream of being an astronaut as a kid? Do you think you could handle life on a space station?