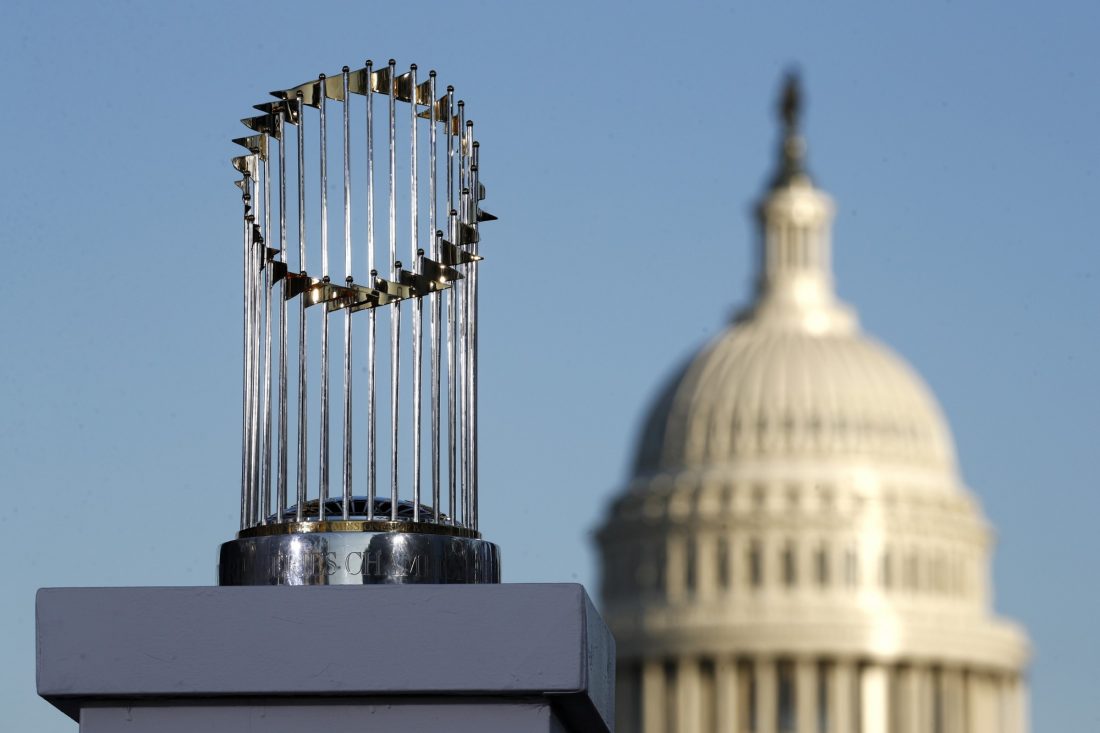 The song “Baby Shark” blared over loudspeakers and a wave of red washed across this politically blue capital Saturday as Nationals fans rejoiced at a parade marking Washington’s first World Series victory since 1924.

“They say good things come to those who wait. Ninety-five years is a pretty long wait,” Nationals owner Ted Lerner, who is 94, told the cheering crowd. “But I’ll tell you, this is worth the wait.”

As buses carrying the players and team officials wended their way along the parade route, pitcher Max Scherzer at one point hoisted the World Series trophy to the cheers of the crowd.

At a rally just blocks from the Capitol, Scherzer said his teammates grinded their hearts out to “stay in the fight.” And then, after backup outfielder Gerardo Parra joined the team, he said, they started dancing and having fun. And they started hitting. “Never in this town have you seen a team compete with so much heart and so much fight,” he said.

And then, after he spoke, the Nats danced.

Team officials, Nationals manager Dave Martinez and several players thanked the fans for their support through the best of times and staying with them even after a dismal 19-31 start to the season. “I created the circle of trust and I trusted these guys,” he said.

The camaraderie among the players was a theme heard throughout the rally. “It took all 25 of us, every single day we were pulling for each other,” said pitcher Stephen Strasburg, the World Series MVP.

Nationals veteran slugger Howie Kendrick, 36, said that when he came to the Nationals in 2017, “I was thinking about retiring. This city taught me to love baseball again.”

Another veteran, first baseman Ryan Zimmerman, choked back tears as he recalled how he and the fans grew up together. He was 20 when he joined the Nationals during their first season, in 2005.

“I got guys that come up to me now that are 30 years old and said I’ve been their favorite player since they were a little kid, which is disturbing — basically like Juan,” he said.

It was a reference to Juan Soto, the left fielder who turned 21 during the series.

Washington had been thirsting for a World Series championship for nearly a century. The Nationals gave them that by winning in seven games over the Houston Astros; the clincher came on the road Wednesday night.

“I just wish they could have won in DC,” said Ronald Saunders of Washington, who came with a Little League team that was marching in the parade.

Nick Hashimoto of Dulles, Virginia, was among those who arrived at 5 a.m. to snag a front-row spot. He brought his own baby shark toy in honor of Parra’s walk-up song, which began as a parental tribute to the musical taste of his 2-year-old daughter and ended up as a rallying cry that united fans at Nationals Park and his teammates. 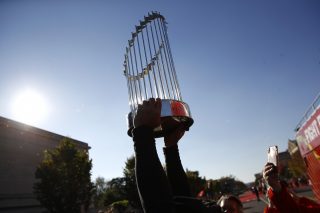 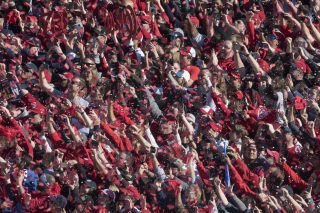 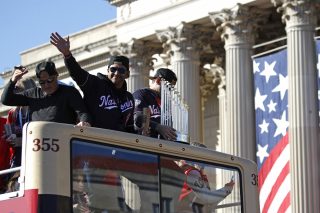 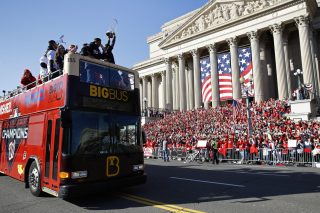 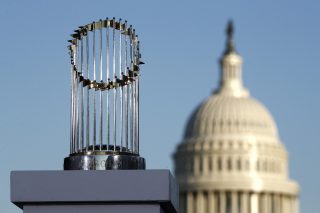 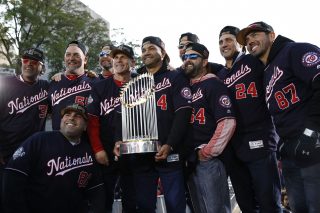 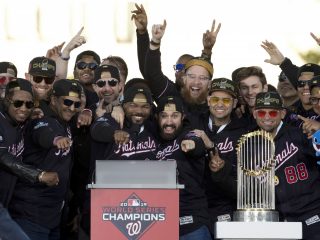 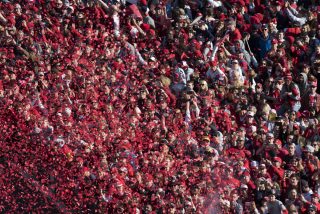 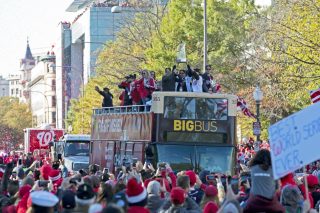 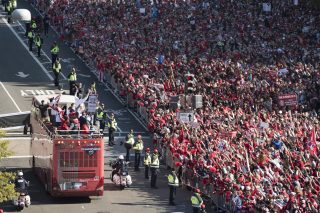 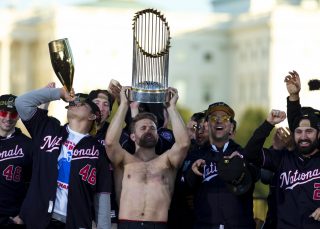 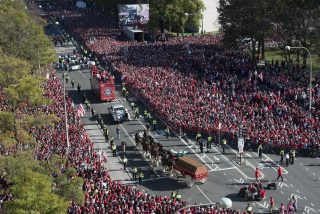 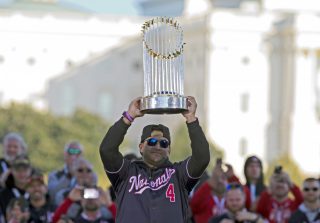 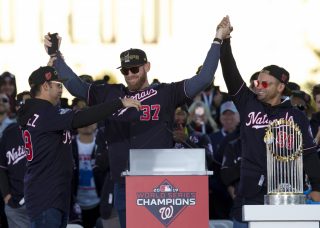 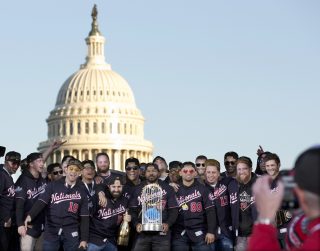 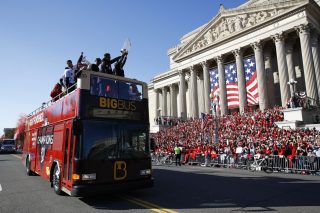 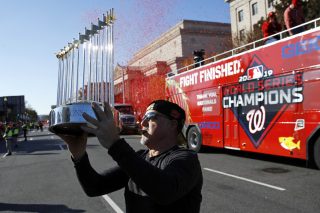 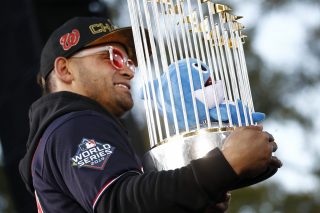 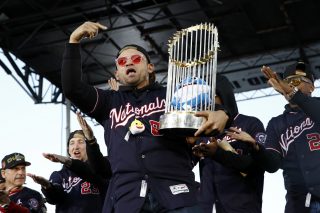 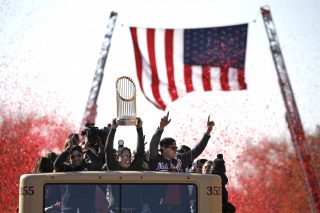 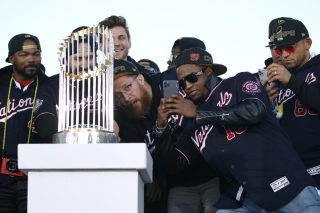 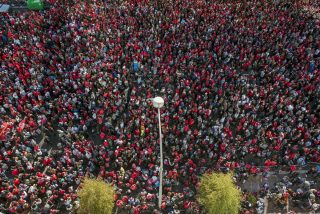 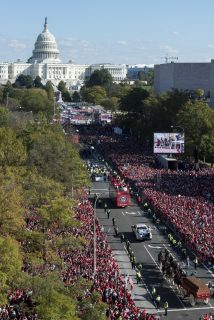 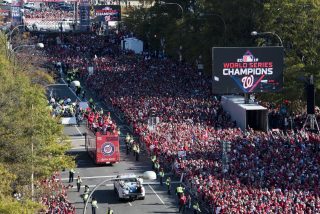 As “Baby Shark, doo doo doo doo doo doo” played on a crisp morning, early risers joined in with the trademark response — arms extended in a chomping motion. Chants of “Let’s go Nats!” resonated from the crowd hours before the rally.

Kimberly Ballou of Silver Spring, Maryland, said sports “is a unifier” that transcends race, gender and class and brings people together.

The crowd along the route was deeply packed. Cheers went up and fans waved red streamers, hand towels and signs that said “Fight Finished” as the players rode by on the open top of double-decker buses. General Manager Mike Rizzo, a cigar in his mouth, jumped off with the World Series trophy to show the fans lining the barricades and slap high-fives. Manager Martinez also got in on the fun.

“We know what this title means to DC, a true baseball town, from the Senators to the Grays and now the Nationals,” Mayor Muriel Bowser said. “By finishing the fight you have brought a tremendous amount of joy to our town and inspired a new generation of players and Nationals fans.”

Bowser added: “We are deeply proud of you and I think we should do it again next year. What do you think?” Then she started a chant of “Back to back! Back to back!”

Martinez said he liked to hear the mayor pushing for back-to-back championships and said: “I get it. I’m all in. But let me enjoy this one first. I don’t know if my heart can take any more of this right now. I need to just step back and enjoy this.”

Martinez, who had a heart procedure recently, said that during the Series, as things heated up, players and fans shouted at him to watch out for his heart. “All this right here has cured my heart,” he said.

And as the “Baby Shark” theme played once more, team owner Lerner told the team’s veterans, “From now on, you can call me ‘Grandpa Shark.’”

President Donald Trump has invited the Nationals to the White House on Monday, though relief pitcher Sean Doolittle doesn’t plan to attend.

“There’s a lot of things, policies that I disagree with, but at the end of the day, it has more to do with the divisive rhetoric and the enabling of conspiracy theories and widening the divide in this country,” Doolittle told The Washington Post.

But to fan Bridget Chapin, who came from Burke, Virginia, with her husband, Mark, “Regardless of how you feel, you go to the Oval Office. I’m really weary of athletes making political statements. I watch sports to get away from all that.”

The president attended Game 5 in Washington and was greeted with loud boos when he was shown on the giant video screen during a tribute to veterans. The boos more than overwhelmed a scattering of cheers.

Delores Smith of Washington, a longtime baseball fan who said she had an uncle who pitched in the Negro Leagues, said the World Series was “a big win” for the city. “This is the first time in a long time that I’ve seen the whole city come together. There’s no fussing about Trump.”

Even with the threat of stars leaving for free agency — as outfielder Bryce Harper did after 2018 — fans hoped the Nationals’ success would continue.

“I don’t think it’s going to be our last time. This team, even when our last superstar left, this team rallied around, they played as a team,” Larry Stokes said.

Fans — and shortstop Trea Turner — urged the Nationals to re-sign third baseman Anthony Rendon, who was greeted with chants of MVP.