Washington, D.C. (Wednesday, February 12, 2020) – Chet Bennett is known for his giving spirit of helping others and building an empire in the beauty industry that has  elevated countless aspiring master hairstylists in the DMV.  That’s why when he was in need of a kidney a year ago it’s not surprising one of his mentees, Acia Williams, would be the person to help save his life.  Bennett has now been able to give Williams a new lease on life by gifting her one of his salons.

On Monday, Williams’ lifelong dream of owning a salon came true when she opened the doors of  “A New Image By Acia” at 705 U Street, NW.  “I always knew that someday I would be an owner.  But I never knew it would come like this,” said Williams.  For Bennett, it was a no brainer.  “Acia stepped forward to help me.  So for me to be able to help her achieve her dream is really a blessing for me,” said Bennett.

Bennett owns several salons in the District of Columbia and a beauty college.  Williams worked her way up at Bennett’s “C Alan Signature Salon” on U Street eventually becoming manager.  That same salon now bares her name.  Both Bennett and Williams talked to WHUR Digital Reporter Candice Adkins about their journey and the value of paying it forward. 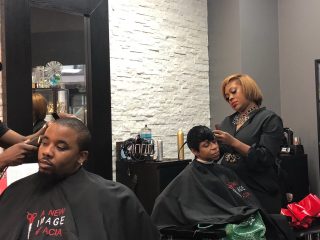 Williams and Bennett have been a big part of each other’s lives for nearly 20 years.  But when she learned her friend and mentor needed a kidney, Williams admits she had to truly educate herself on the issue.  She had no idea that kidney disease was such a prevalent issue for African Americans.  “It was heartbreaking to see him so weak while he was going through dialysis,” said Williams. Bennett spent 14 months going through dialysis and was in desperate need of a new kidney.  Williams was one of nearly a dozen people who stepped forward to help.  It turns out she was a perfect match and last April 9th they had the transplant surgery .

Both Williams and Bennett are doing well and now they are on a mission to spread the word about the importance of organ donations.  Dr. Acia Williams is also a Certified Non-Surgical Hair Loss Practitioner.