Washington, D.C. (Thursday, February 29, 2020) – Lots of fireworks from Las Vegas last night as the democratic presidential candidates hit the stage for the 9th debate. It was, by most accounts, a literal slugfest with many of the candidates throwing jabs at newcomer former New York Mayor Michael Bloomberg.

Six candidates took to the stage with healthcare taking up a major part of the discussion along with who would be the most fit candidate to take on President Donald Trump in the upcoming November general election. Many of the candidates piled on Bloomberg, taking jabs at his wealth and former stop and frisk policy.  Senator Elizabeth Warren came out swinging first.  “A billionaire who calls women fat broads and horse faced lesbians.  And no I’m not talking about Donald Trump.  I’m talking about Mayor Bloomberg,” said Warren. 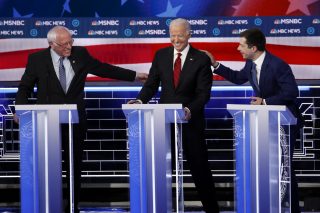 Bloomberg, who was once a republican, was forced to defend his personal wealth while Bernie Sanders tried to beat back questions on his health.  As for Joe Biden, he criticized Bloomberg on his stop and frisk policy. “Bloomberg ended up throwing 5 million black men up against the wall,” said Biden.

Pete Buttigieg went after Bloomberg and Sanders warning that one threatened to burn down the Democratic Party and the other was trying to buy it.

The race for the White House is expected to intensify in the coming weeks. Voters in Nevada head to the polls Saturday and South Carolina follows on February 29th.