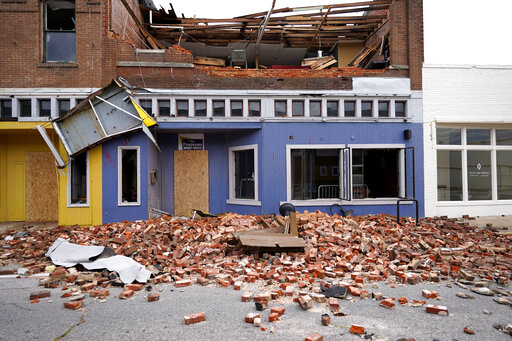 LAKE CHARLES, La. — Early reports emerging in the wake of Hurricane Laura show less damage than what was feared.

The eye passed directly over Lake Charles, where drone video shows roofs ripped off, exposing living rooms to the elements; trees downed and water overflowing the banks of coastal properties.

But FEMA Administrator Peter Gaynor says the damage seems to be less than what they feared with Laura hitting the coast as a potentially catastrophic Category 4 hurricane early Thursday.

Gaynor told ABC’s “Good Morning America” that the surge turned out to be less than what was forecasted, but he expects significant wind damage to buildings once they do proper surveys of the disaster area.

Louisiana State Police Maj. Doug Cain said they received a report that the Isle of Capri’s riverboat casino broke from its mooring and was stuck against the Interstate 10 bridge in Lake Charles. The casino says its Grand Palais riverboat houses 34 table games and more than 1,175 slot machines.

Gov. John Bel Edwards said he’s received report of the first fatality from Hurricane Laura in Louisiana, a 14-year-old girl who died when a tree fell on her home in Leesburg.

The governors of Louisiana and Texas say search and rescue teams are still looking, but they’ve found no reports so far of widespread fatalities.

Texas Gov. Greg Abbott is crediting the evacuations of thousands of people for preventing deaths in Texas. Edwards says they are only beginning to assess the damage.

Both governors say the storm surge appears to have been not as bad as they feared.

Abbott said the hurricane’s storm surge hit the east Texas communities of Port Arthur, Beaumont and Orange “pretty hard” overnight and the eye of the hurricane has continued to move about 100 miles north along the Texas-Louisiana state line.

LITTLE ROCK, Ark. — Hurricane Laura is headed toward Arkansas, where an unusual tropical storm warning has been issued for much of the state.

The storm is hitting during the state’s first week back at public school since March. Many schools in the southern half of Arkansas opted to cancel classes Thursday or dismiss early because of the storm.

Arkansas Gov. Asa Hutchinson declared an emergency and set aside $250,000 for the state to prepare for the hurricane’s impact. Hutchinson said the state will have search and rescue teams on standby.

Laura is now a Category 1 hurricane but still blowing hard enough to be deadly. The first reported death, of a girl whose house was hit by a tree, was in Leesburg, more than 100 miles inland from the coast.