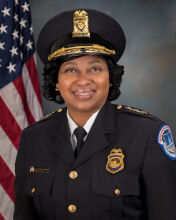 An acting Capitol police chief has been named and it is historic. Yogananda Pittman is the first woman and first African American to hold the position. Pittman becomes acting chief following the resignation of Steven Sund.  Sund came under fierce criticism for his handling of the riot that took place at the Capitol on Wednesday.  Pittman is a 20-year veteran of the force and a graduate of Morgan State University.