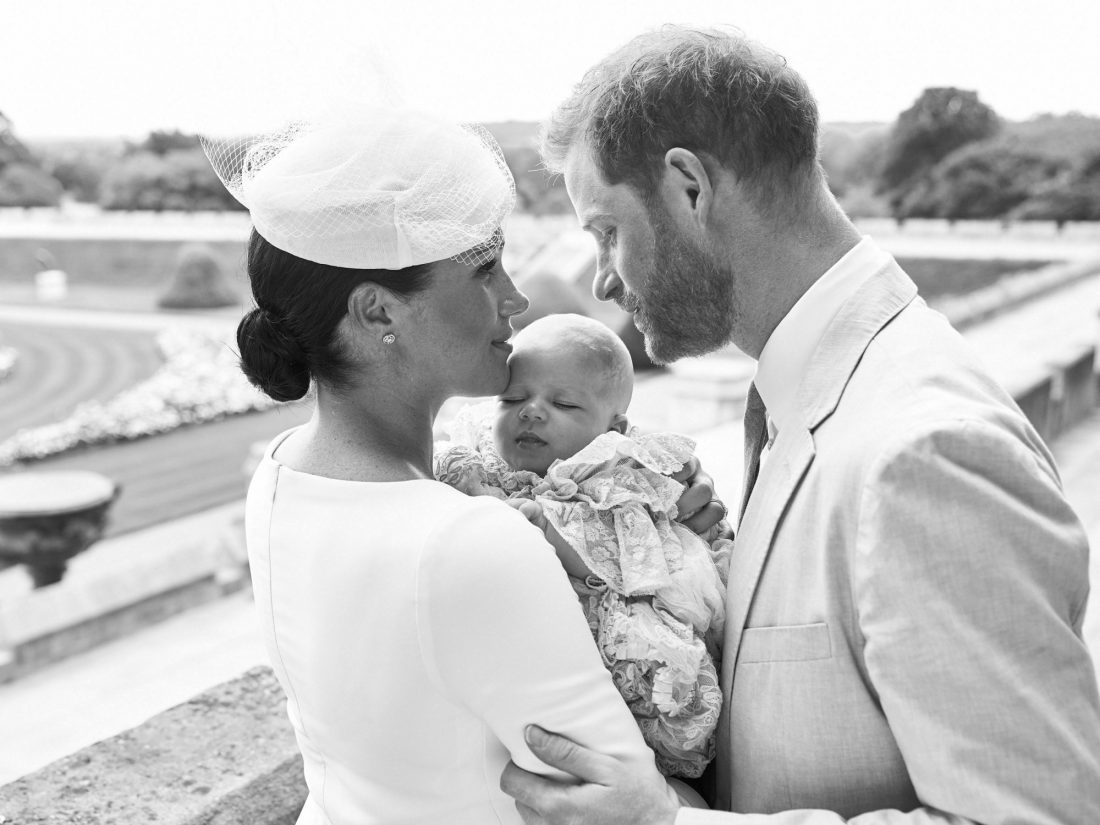 LONDON (AP) — The youngest member of Britain’s royal family, Archie Harrison Mountbatten-Windsor, was christened at Windsor Castle on Saturday in a private ceremony — too private for some royal fans.

The 2-month-old son of the Duke and Duchess of Sussex was baptized in the castle’s private chapel by Archbishop of Canterbury Justin Welby, head of the Church of England.

Palace officials said that, in keeping with royal tradition, Archie wore a lace and satin christening gown — a replica of one made for Queen Victoria’s eldest daughter in 1841 — that was also used for his cousins Prince George, Princess Charlotte and Prince Louis.

He was sprinkled with water from the River Jordan at an ornate silver baptismal font that has been used in royal christenings for more than 150 years.

Archie, born May 6, is the first child of Prince Harry and the former Meghan Markle, and seventh in line to the British throne.

His parents released two photos taken by fashion photographer Chris Allerton, including a black-and-white image showing the couple cradling a tranquil Archie between them, with the castle’s Rose Garden in the background.

It was accompanied by a color portrait taken in the castle’s Green Drawing Room of the young family surrounded by relatives, including Harry’s brother Prince William and his wife Kate; Harry’s father Prince Charles and his wife Camilla; Meghan’s mother Doria Ragland; and Jane Fellowes and Sarah McCorquodale, the sisters of Harry’s late mother Princess Diana.

Archie’s great-grandmother, Queen Elizabeth II, did not attend the christening because of a prior engagement.

Meghan and Harry have faced criticism for declining to reveal the names of Archie’s godparents, and not giving the public a glimpse of the event — though that didn’t stop well-wishers coming to Windsor with Union Jack flags, banners and even a cake to mark the occasion.

Harry, whose mother Diana was pursued by paparazzi until her death in a Paris car crash in 1997, has long had a tense relationship with the media. The tension intensified after he began his relationship with Meghan, an American former actress who starred in TV legal drama “Suits.”

In May, Harry accepted damages and an apology from a news agency that used a helicopter to take photos of a secluded rural retreat that he and Meghan had rented.

Earlier this year the couple moved from central London to a more secluded home near Windsor Castle, some 25 miles (40 kilometers) west of London.

The royal couple’s decision not to allow media access to the christening sparked controversy in part because of the recent revelation that their Frogmore Cottage home was renovated with 2.4 million pounds ($3.06 million) of taxpayers’ money.

Royal fan Anne Daley, who brought a home-baked cake to Windsor, said she was “very hurt” by the level of privacy.

“That baby is Princess Diana’s grandson. We should be able to see the christening,” she said.

This story has corrected a typographical error in the royal baby’s last name to Mountbatten-Windsor, not Mountabatten-Windsor.