(Saturday, May 14, 2022) – A white gunman opened fire Saturday afternoon at a crowded supermarket in Buffalo, New York  killing 10 people and injuring three others while live-streaming with a helmet camera.  Police are calling the shooting racially motivated and say the gunman was an extremist dressed in military style clothing and was wearing body armor. 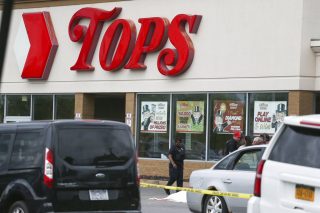 A majority of the victims were Black.  The gunman, identified as 18-year-old Payton Gendron of Conklin, is in custody.  At a news briefing Saturday, Erie County Sheriff John Garcia called the shooting a hate crime.  “This was pure evil.  It was straight up racially motivated hate crime from somebody outside of our community, outside of the City of Good Neighbors coming into our community and trying to inflict that evil upon us,” said Garcia. 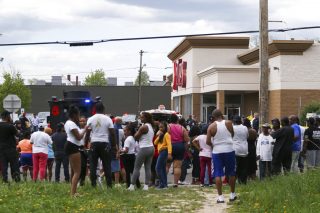 Police say Gendron shot four people outside of the store and then moved inside the Tops Friendly Supermarket and opened fire.  One of the victims was a retired Buffalo police officer who was a security guard at the supermarket.  Authorities say the guard shot Gendron, but because the gunman was wearing body armor he was not hurt and was able to continue his shooting rampage.  11 of the 13 people shot were Black.