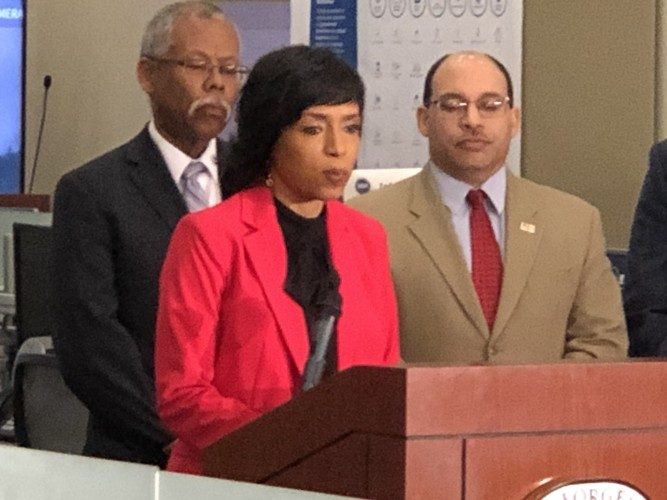 Largo, Maryland (Tuesday, March 10, 2020) – Prince George’s County has joined many other jurisdictions across the DMV trying to balance information while controlling panic and fear of the ever spreading coronavirus.  County Executive Angela Alsobrooks this morning updated residents on  COVID-19, announcing three confirmed cases.

The victims are a woman in her 50s and a couple.  All three victims are said to be in good condition and are self-quarantined at home as are their family members. The woman in her 50s apparently contracted the virus while on a trip to Boston between February 25th – 27th.  Not much is known about the couple, except they are returning from an international cruise.  Alsbrooks also announced she had just learned about their positive testing moments before the press conference.  Officials are now trying to retrace the steps of all the victims to see who they may come in contact with in recent weeks.

Meantime, Alsbrobrooks has raised the county’s level of emergency operations center from enhanced to a partiial activation.  Residents with questions about the coronavirus can call 301-883-6627.

As a precaution, the County Executive has canceled two upcoming events, the Women’s History Month Luncheon and the Census Block Party were slated for later this month. Alsbrook says she will rescheduled both once the county gets beyond the coronavirus crisis.