The people who call Brunswick, Georgia, home say it’s not the monstrous place it might appear to be in the wake of the slaying of Ahmaud Arbery after a pursuit by two armed white men.

Yes, it is one of Georgia’s poorest cities where much of the black working population has struggled to find opportunities for advancement and where one black resident says he walks on tip toes to avoid racist insults.

But it’s also a city with a black mayor and one where longtime residents say black and white people — all the way back to the civil rights movement — have long worked together to solve thorny questions about racial equality.

Now, Arbery’s slaying as well as the subsequent investigation criticized for being too slow have put Brunswick in the national spotlight and raised questions about whether recent events reflect something rotten in the coastal city’s culture.

On the contrary, residents say, Brunswick has often stood out for its ability to work through troubled times peacefully, though it is far from perfect. 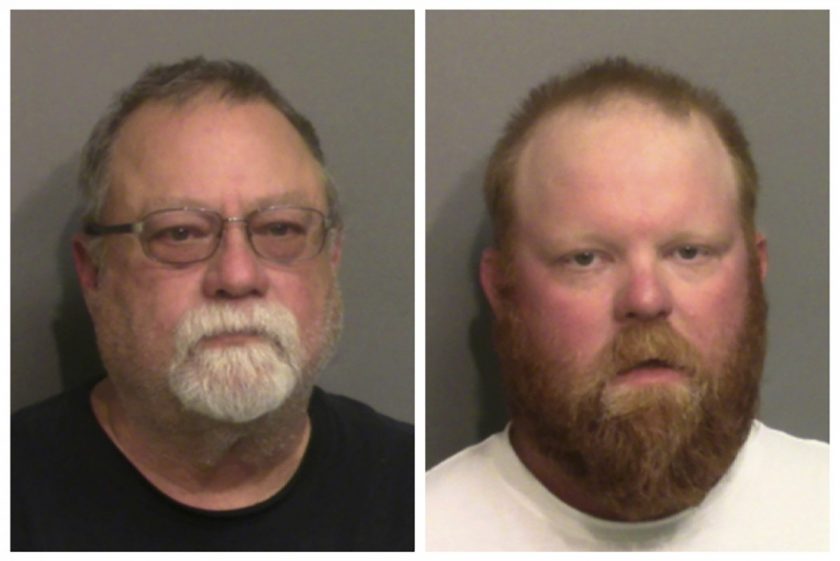 “I don’t think a few bad white people have defined this whole community,” Mayor Cornell Harvey told The Associated Press. “I’m sure there are people who have hidden feelings about race, on an individual level. But I’ve seen this community come together.”

Arbery was killed Feb. 23 in a subdivision called Satilla Shores that is just outside the city limits but considered part of the broader Brunswick community. A white father and son told police they pursued him in their truck because they suspected him of being a burglar. An autopsy showed Arbery was killed by three shotgun blasts, and cellphone video of the shooting led to a national outcry when it hit the internet last week — both for the grisliness of the footage but also because the men had not been arrested, two months after the killing.

Gregory McMichael, 64, and Travis McMichael, 34 were charged with felony murder and aggravated assault soon after the video leaked.

There have been allegations that race played a role in delaying the arrests, and the state’s attorney general announced an investigation Tuesday into how the case was initially handled, a day after he appointed the third outside prosecutor — an Atlanta-area district attorney who is black — to take over.

Brunswick, with a population of more than 16,000 residents, is more than half black. Surrounding Glynn County is more reflective of the state’s racial makeup: It has more than five times as many people as Brunswick and is 63% white, 27% black and 7% Hispanic. 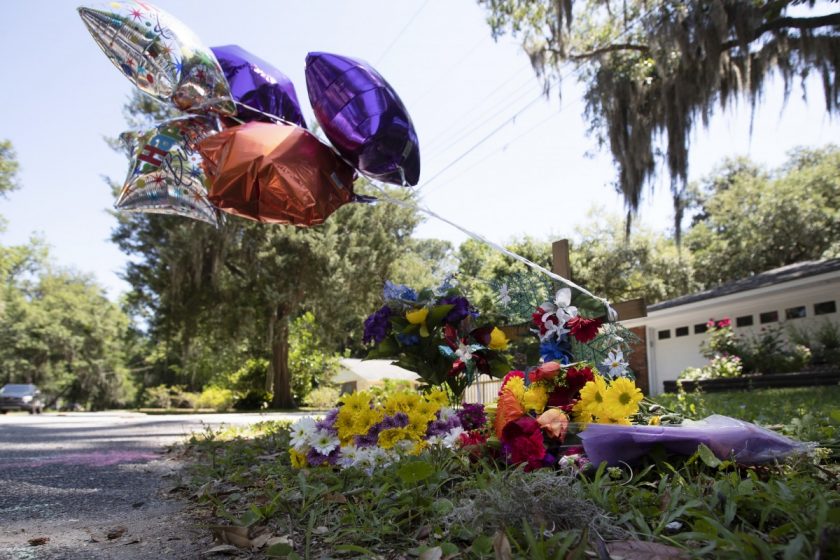 The Rev. John Perry III, president of the Brunswick branch of the NAACP, moved to the city 13 years ago, and was “pleasantly surprised that the people here have a great heart,” he said.

But he remains concerned by socioeconomic inequality in the city. Much of Brunswick’s black workforce is blue collar, he said, and many lack opportunities to move up the ladder. A recent review of median annual household income data by 24/7 Wall St. found Brunswick was Georgia’s poorest city. The city has a 39% poverty rate, compared to 16.9% in the state overall.

“It’s not that we don’t have a black base that has gone out and educated themselves,” Perry said. “Too many people have been overlooked for better opportunities.”

Still, he does not think the problem is one of “racial hatred.” Instead, he points to the fact that people in power tend to help people they know, and often the people in power are white.

But Ryan Marshall, a 27-year-old black man who has lived in the Brunswick area since he was a young boy, says he has experienced more direct prejudice: His co-workers have called him a racist slur “if I don’t do exactly what I’m supposed to do.” 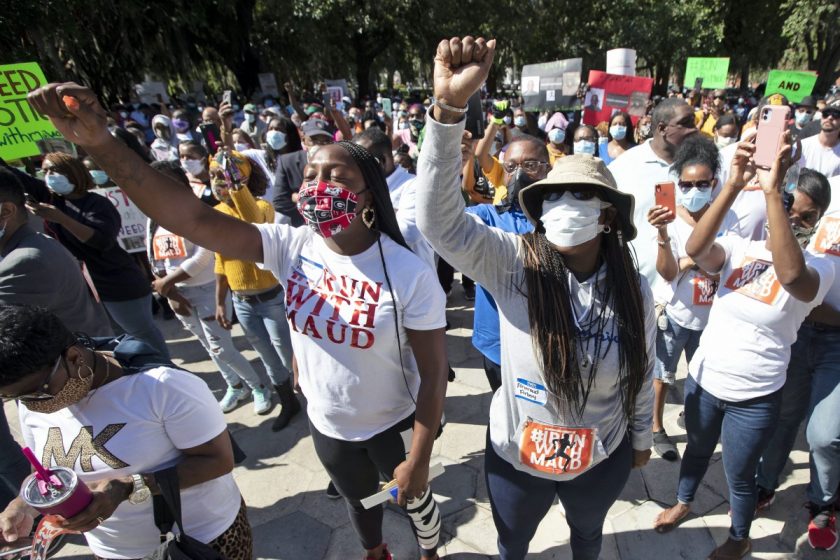 “The difference between me and Ahmaud is I live a life where I take tippy-toe steps to avoid things,” such as the violent confrontation in which Arbery died, said Marshall, who was among hundreds attending a protest Friday outside the Glynn County courthouse. “I shouldn’t have to live in fear.”

Also at the protest was 82-year-old Robert Griffin, who moved to Brunswick in 1961 as the all-black high school’s band director. Almost everything at the time was segregated, so Griffin joined the local NAACP to work toward integration.

It wasn’t always easy. Griffin remembered a city official who had the public swimming pool filled with dirt rather than allowing white and black people to swim together. But the organization worked with white residents, and many places were integrated without protest or confrontation.

“We desegregated this whole county without bloodshed,” Griffin said, while nearby cities had “fighting in the streets.”

Even in the wake of Arbery’s killing, Griffin insisted there’s more unity than racial unrest in Brunswick.

“I saw a bunch of angry folks, blacks and whites” at Friday’s protest, he said. “We’ve always had that kind of support in this community.”

Johnny Cason, a 76-year-old lifelong Brunswick resident who is a city commissioner, agreed.

“This thing has broken my heart, and it’s so wrong,” said Cason, who is white. “But this is a great place, and the world needs to know about it.”

Roxane George noted that some residents in the area fly the Confederate battle flag, a banner people associate with both racism and pride in southern heritage. But she also pointed to a recent anti-racism training she co-facilitated at the city’s Robert S. Abbott Race Unity Institute. 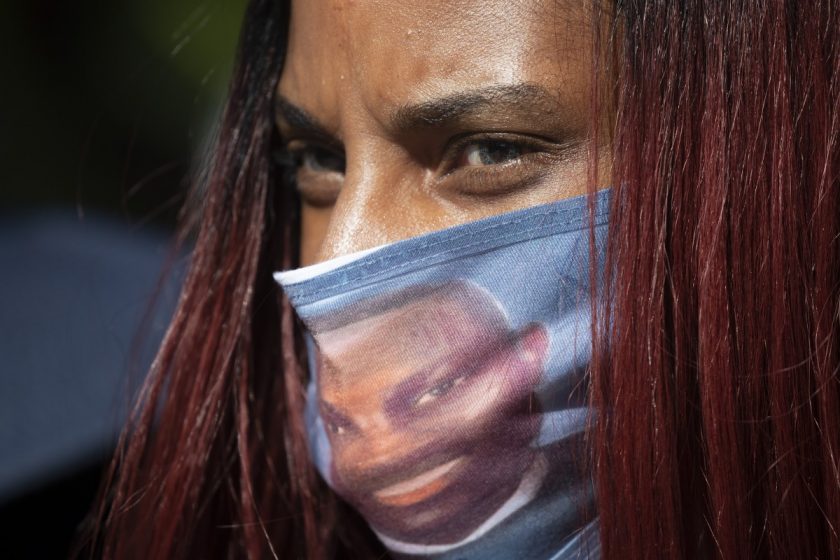 “People in this community overwhelmingly stand ready to do what they think is needed to address” racism, said George, who is white. Ahmaud’s killing “is not just an issue that people here say is one for the black community. Black, brown, white — we’ve all felt this was extremely hurtful.”

Harvey, the mayor, agreed the city has work to do and suggested white residents could reflect on their biases: “When you see me, what do you see? What are you thinking about me?”

Bynum reported from Savannah, Georgia. Morrison reported from New York and is a member of The Associated Press’ Race and Ethnicity team. Follow him on Twitter at https://twitter.com/aaronlmorrison.