WASHINGTON (AP) — President Joe Biden accused Donald Trump and his supporters of holding a “dagger at the throat of democracy” in a forceful speech Thursday marking the anniversary of the deadly attack on the U.S. Capitol. He warned that though it didn’t succeed, the insurrection remains a serious threat to America’s system of government.

Biden’s criticism was blistering of the defeated president whom he blamed for the assault that has fundamentally changed Congress and the nation, and raised global concerns about the future of American democracy.


“For the first time in our history, a president not just lost an election, he tried to prevent the peaceful transfer of power as a violent mob breached the Capitol,” Biden said. “You can’t love your country only when you win.”

His voice booming at times, filling the ornate Statuary Hall where rioters had laid siege, the president called on Americans to remember what they saw Jan. 6 with their own eyes: the mob attacking police, breaking windows, a Confederate flag inside the Capitol, gallows erected outside threatening to hang the vice president — all while Trump sat at the White House watching it on TV. 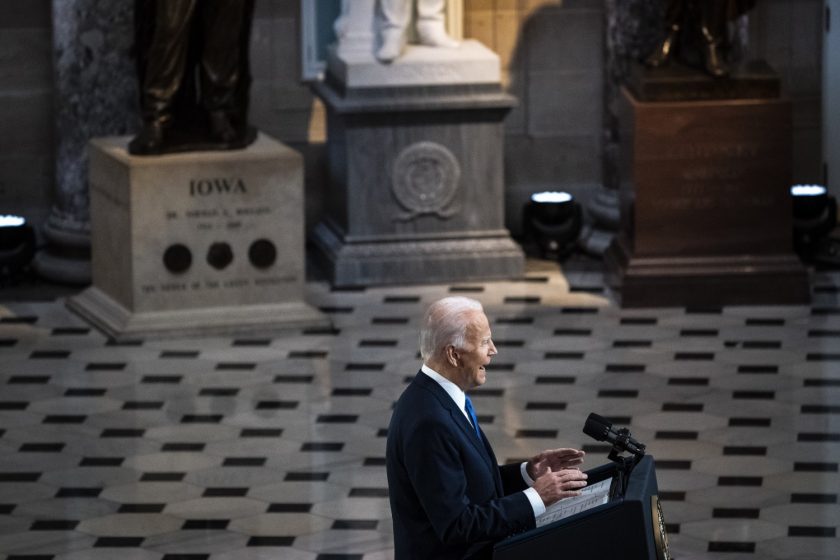 “The former president’s supporters are trying to rewrite history. They want you to see Election Day as the day of insurrection and the riot that took place here on January 6 as a true expression of the will of the people. Can you think of a more twisted way to look at this country, to look at America? I cannot.”

The president’s remarks launched the start of daylong remembrance, drawing a contrast between the truth of what happened and the false narratives that persist about the Capitol assault, including the continued refusal by many Republicans to affirm that Biden won the 2020 election.

“We must be absolutely clear about what is true and what is a lie,” Biden said. “The former president of the United States of America has spread a web of lies about the 2020 election.”

He said: “We are in a battle for the soul of America.”

“I did not seek this fight, brought to this Capitol one year from today. But I will not shrink from it either. I will stand in this breach, I will defend this nation. I will allow no one to place a dagger at the throat of this democracy.”

Republican leaders and lawmakers largely stayed away from the day’s events, dismissing them as overly politicized — some continuing to spread false claims about the election.