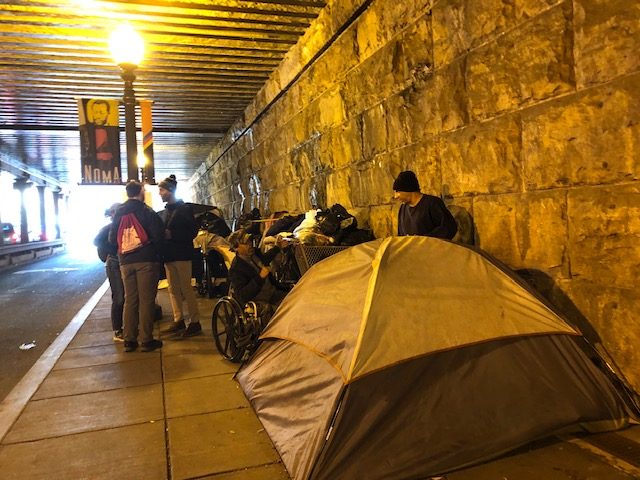 DC Moves In To Move Homeless Out

Washington, D.C. (Thursday, January 16, 2020) – Dozens of homeless persons in the District are looking for other places to stay.  This after city crews moved in this morning to haul off tents and other items under the NoMa underpass on K Street, NE.  It was all part of an initiative Mayor Muriel Bowser called Encampment Protocol Engagement, where the sidewalks  were cleared and cleaned.

WHUR News Director Renee Nash was live as the big eviction was underway and spoke with volunteers, homeless persons impacted, and advocates working to find new places for the homeless.  City officials say the removal policy is necessary because of the large number of tents crowding narrow sidewalks like those on K Street. Mayor Bowser says the city is working with those impacted to offer homeless services.

But homeless advocates like Adjoa Aiyetoro decried today’s action, calling it inhumane.  “My problem is the city is really not doing enough to address the homeless problem.  There needs to be more adequate housing for low income people.  They are treating the homeless like they are not human.  The mayor is doing all this fabulous building of these big high-rises and people can’t afford these places,” said Aiyetoro, a volunteer with the Washington Legal Clinic for the Homeless. 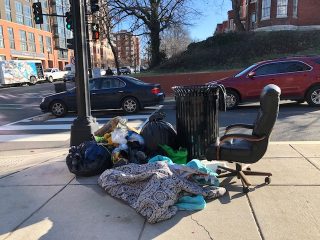 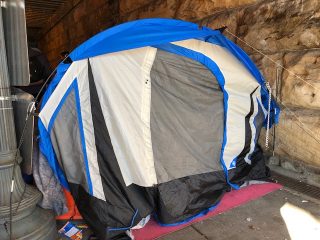 City officials notified those housed under the bridge two-weeks ago that they had to move out or their items would be discarded.  Shortly after 10am, city dump trucks and workers armed with brooms, shovels, and rakes moved in to discard all the tents and debris left behind.  Volunteers also scrambled to help the homeless to move to an area around the corner or a few streets over.

Michael Harris, who is also wheelchair bound, has lived under the K Street Bridge for the past 8 months.  He’s not sure where he will go next.  He has a housing voucher.  But says his housing will not be available for another six weeks.  “For now, I will just have to keep living on the streets,” said Harris. 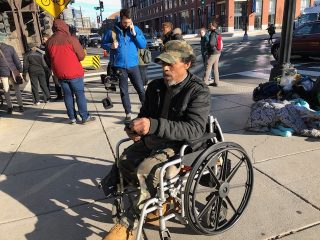