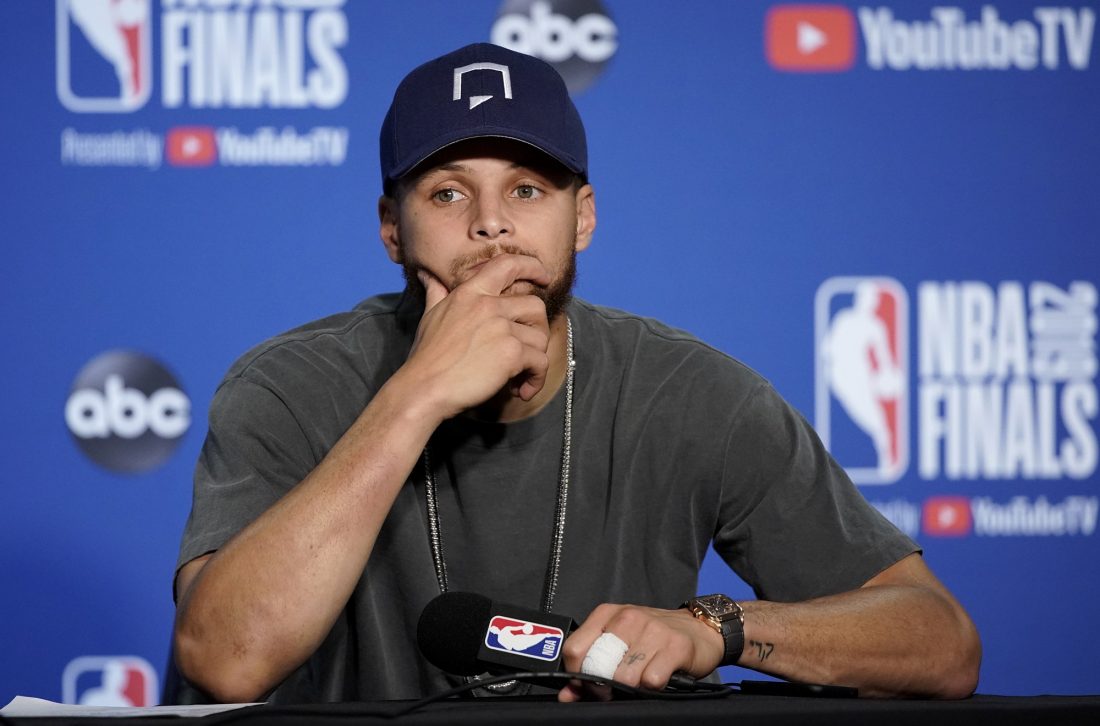 LOS ANGELES (AP) — Stephen Curry may be a sharpshooting three-time NBA champion, but he is quickly building a career away from the court to inspire the masses through his burgeoning production company.

The Golden State Warriors superstar is strategically producing content that focuses on sports, family and faith through Unanimous Media , which he co-founded with Jeron Smith and Erick Peyton. The newly formed production company already has several projects under its belt including a major studio film, network television show and a couple documentaries in just a year.

The 31-year-old player said he wants to “uplift people who need to be uplifted.”

“We’ve been very selective about the things we want to bring to our audience,” he said. “In our first year, we really wanted to make people think, feel, laugh, cry and challenge them. When I’m out on the court, I’m all about inspiring people with my faith — win or lose. I try to do it with glory and with a smile on my face. We’re trying to take that same idea to our projects.”

One of Curry’s latest projects features himself in his original docuseries “Stephen vs. The Game ” on Facebook Watch, a video-on-demand service.

The six-episode series chronicles his journey through this past season, featuring behind-the-scenes footage of Curry’s intense training regiment, family life and old videos from his youth basketball career. He and his wife, Ayesha, open up about their first date, and the reasoning behind his ritual of writing the partial Bible verse “I can do all things” on his basketball shoes since his days at Davidson College. The Currys have three children.

The upcoming season finale will focus on the Warriors’ injury-riddled playoff run that ended in the back-to-back champs losing the NBA Finals against the Toronto Raptors this month.

“The finish this season was one of the most vulnerable ones,” he said. “Everybody wants the storybook ending where you have all these challenges and bumps in the road, but you end up at the finish line holding up the trophy, but it doesn’t always work out like that. But I learned a lot along the way, and I hope others can learn from watching my walk too.”

Smith said it’s all a part of Curry’s plan to impact the world in a positive manner through media.

“Everything is definitely by design,” said Smith, a former Nike brand manager and White House deputy of digital strategy during the Obama administration. He is the CEO, and Peyton serves as CCO for the production company.

“The first thing executives at Sony told us was that this is a tough business,” he said. “But what has helped us be successful is that everything we’re doing is rooted in purpose. That purpose gives us a point of view as you’re moving forward, as opposed to how a traditional media company would do it.”

The docuseries is among a slew of projects from Curry’s Unanimous Media, which is a play off him becoming the first unanimous MVP in NBA history in 2016.

Last year, Unanimous Media struck a deal with Sony Pictures Entertainment to produce television and film projects. The production company will have its production headquarters on the Sony backlot in Culver City, California.

So far, Curry has received executive producer credits with actress Viola Davis for the new documentary “Emanuel,” which explored life after a tragic South Carolina church shooting in 2015, and the inspirational film “Breakthrough,” a modestly budget faith-based movie that opened third at the box office earning $11.1 million in the first week.

“It was powerful movie, but it wasn’t just about the money it made,” Curry said. “It was about the people who text, DM and texted me to get their take on life and faith. Those moments are special.”

Unanimous is also behind a mini-golf competition show on ABC called “Holey Moley,” which drew 4.87 million viewers after it premiered June 20. The company is working on a docuseries about a storied high school basketball program in New Jersey called “Benedict Men,” which is expected to release when the streaming platform Quibi launches next year, and a documentary “JUMP SHOT,” which tells the story of Kenny Sailors, who developed the modern day jump shot in basketball.

Curry is a part of a movement of NBA players who are creating production companies including LeBron James and Kevin Durant. Kobe Bryant won an Oscar for his animated short “Dear Basketball.” The Warriors point guard said he was inspired to move into the TV and film production space after seeing their success, but he wants to pave his own way with his own message.

“Everybody needs examples,” Curry said. “But I’m going to do this my way. They’re doing amazing stuff. This space is big enough for everybody to win. In terms of our projects, we are going to stay true to ourselves. It’s all about changing people’s lives. I never want to get away from inspiring people.”