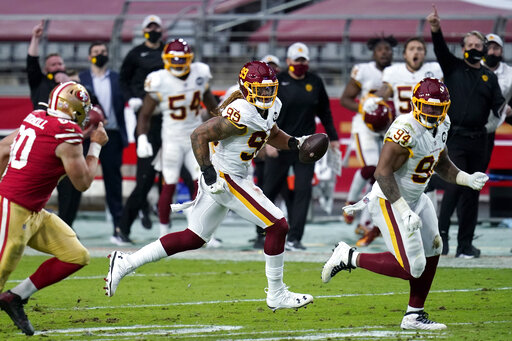 First place in the NFC East, that is where Washington’s Football Team sits today after a 23-15 win over the 49ers Sunday.  Rookies Chase Young and Kamren Curl scored defensive touchdowns.  Dwight Haskins played the entire second half after Alex Smith left the game with a sore calf muscle in his surgically repaired right leg. The 36-year-old Smith was 8 for 19 for 57 yards and an interception in the first half but walked to the locker room in the final minute of the second quarter.  The Burgundy and Gold have won 4 straight. It’s Washington’s first four-game winning streak since 2016.  Washington, now 6-7 on the season, hosts the Seattle Seahawks next Sunday at FedEx Field.