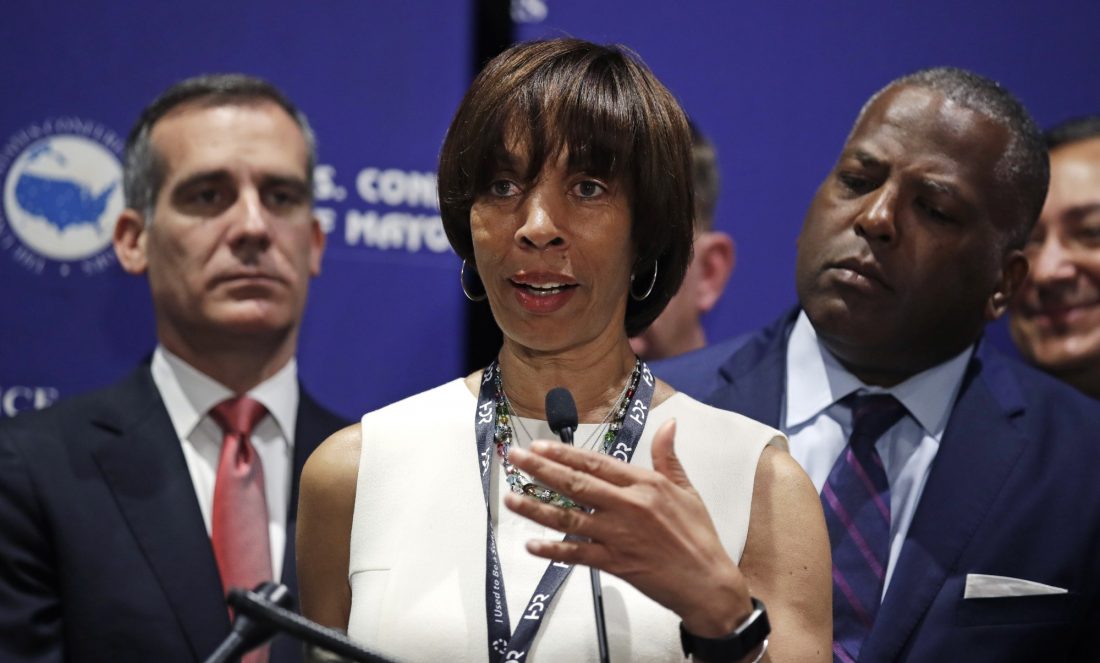 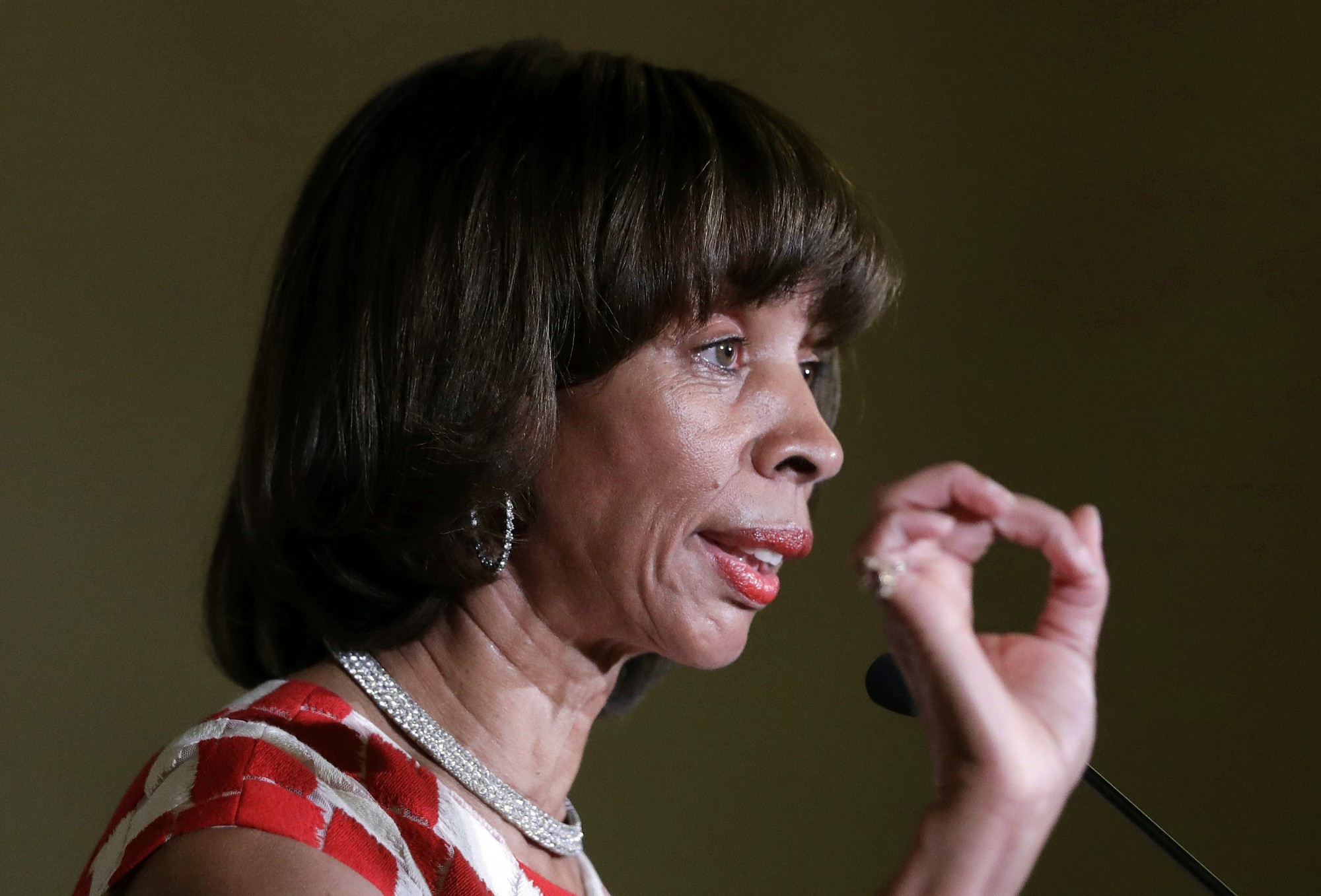 BALTIMORE (AP) — The disgraced former mayor of Baltimore was charged Wednesday with fraud and tax evasion involving sales of her self-published children’s books to non-profits and foundations that did business with the government.
An 11-count federal indictment accuses Catherine Pugh of arranging fraudulent sales of her “Healthy Holly” books to schools, libraries and a medical system to enrich herself, promote her political career and fund her run for mayor.
“There are many victims in this case,” said U.S. Attorney Robert Hur in announcing the indictment. “The victims are all of us, the taxpayers and the people of Baltimore, who expect and deserve integrity from their public officials.”
Federal authorities say Pugh and two city employees double-sold the books or failed to deliver them to institutions they were purchased for, including the Baltimore City Public Schools. Pugh then allegedly used the proceeds to fund straw donations to her mayoral campaign and to renovate a house.
Pugh, who has been in seclusion since early April, is expected to surrender to U.S. marshals ahead of her arraignment Thursday in Baltimore. She’ll appear before U.S. District Judge Deborah K. Chasanow on charges of conspiracy to commit wire fraud, wire fraud, conspiracy to defraud the United States, and tax evasion.
The grand jury indictment returned on Nov. 14 also charged two Pugh associates, Gary Brown, Jr., and Roslyn Wedington, who pleaded guilty to conspiracy and tax fraud.
Hur described the alleged crimes as a years-long “ruse” involving “funny documents” including faked federal tax forms and invoices, and companies that did no actual work.
If convicted, Pugh faces up to 20 years in prison on each wire fraud count, and five years for each tax evasion count. The federal government also will seek to seize a house owned by Pugh and $770,000 as part of any sentence.
Pugh’s attorney, Steven Silverman, declined comment, saying he’ll address the allegations in open court.
Pugh, 69, resigned in May as federal, state and local authorities probed whether she arranged bulk book sales to disguise political kickbacks that netted her hundreds of thousands of dollars over the years. The books were meant for schools and day care centers, but it’s unclear where tens of thousands of copies ended up.
Asked whether he views the buyers of the books as victims or co-conspirators, Hur said people can “rest assured that we are continuing to look at all the potential criminal charges that could be brought.”
Jennifer Boone, special agent in charge of the FBI’s Baltimore Field Office, said the complex and demanding investigation, nearly three years in length, illustrates that “no one is above the law.”
“There is a growing intolerance by the American people of public corruption, an intolerance reflected in the willingness to come forward and report abuse of public office,” Boone said.
The first-term Democrat, who became mayor in late 2016, took a leave from the mayor’s office in early April. At the time, Silverman blamed poor health following a bout of pneumonia, and described Pugh as so fragile physically and mentally that she was unable to make “major decisions.” Days later, FBI and IRS agents raided her offices, homes and other locations, seizing money transfer receipts, a laptop, compact discs and a $100,000 check from the University of Maryland Medical System to Pugh’s “Healthy Holly” company.
The indictment accuses her, among other crimes, of claiming taxable income in 2016 of $31,020, with $4,168 tax due, “when in fact, Pugh’s taxable income was $322,365, with an income tax due of approximately $102,444.”
Pugh’s books included “Healthy Holly: Exercising is Fun” and “Healthy Holly: Fruits Come in Colors like the Rainbow.” Most were sold directly to nonprofits and foundations that did business — or attempted to do business — with the state or the city of Baltimore, according to the indictment.
Brown, an aide to Pugh in the state Senate and during her 2016 campaign, helped hawk the books, often calling himself Healthy Holly’s CEO even though he was never an employee. His lawyer, Barry Pollack, said Wednesday that “Mr. Brown regrets his role in this matter, has resolved the charges against him, and trusts that the court process will treat everyone involved fairly.”
Wedington, who worked with Brown and directed a job training center Pugh chaired, “unfortunately made some wrong decisions” to help pay her medical bills, said her lawyer, Brandon Mead.
Pugh had served in the state legislature since 2005. As a state senator, she sat on a committee that funded the University of Maryland Medical System, one of the state’s largest private employers. She also sat on the hospital network’s board sat starting in 2001, and until the scandal erupted in March, it was her biggest book customer.
The medical system paid Pugh $500,000 for 100,000 copies, but there was no contract, and the system described some of the purchases as “grants” in federal filings. She returned her most recent $100,000 payment and described the deal as a “regrettable mistake” before retreating from public view.
Health care provider Kaiser Permanente also disclosed that it paid Pugh’s Healthy Holly LLC about $114,000 between 2015 and 2018 for roughly 20,000 copies. She oversaw Baltimore’s spending board in 2017, when the city awarded a $48 million contract to the Kaiser Foundation Health Plan of the Mid-Atlantic States Inc.
A longtime city council member, Bernard “Jack” Young, took over as mayor after Pugh resigned. He inherited a city with failing schools, a thriving illegal drug market and one of the nation’s highest rates of violent crime.