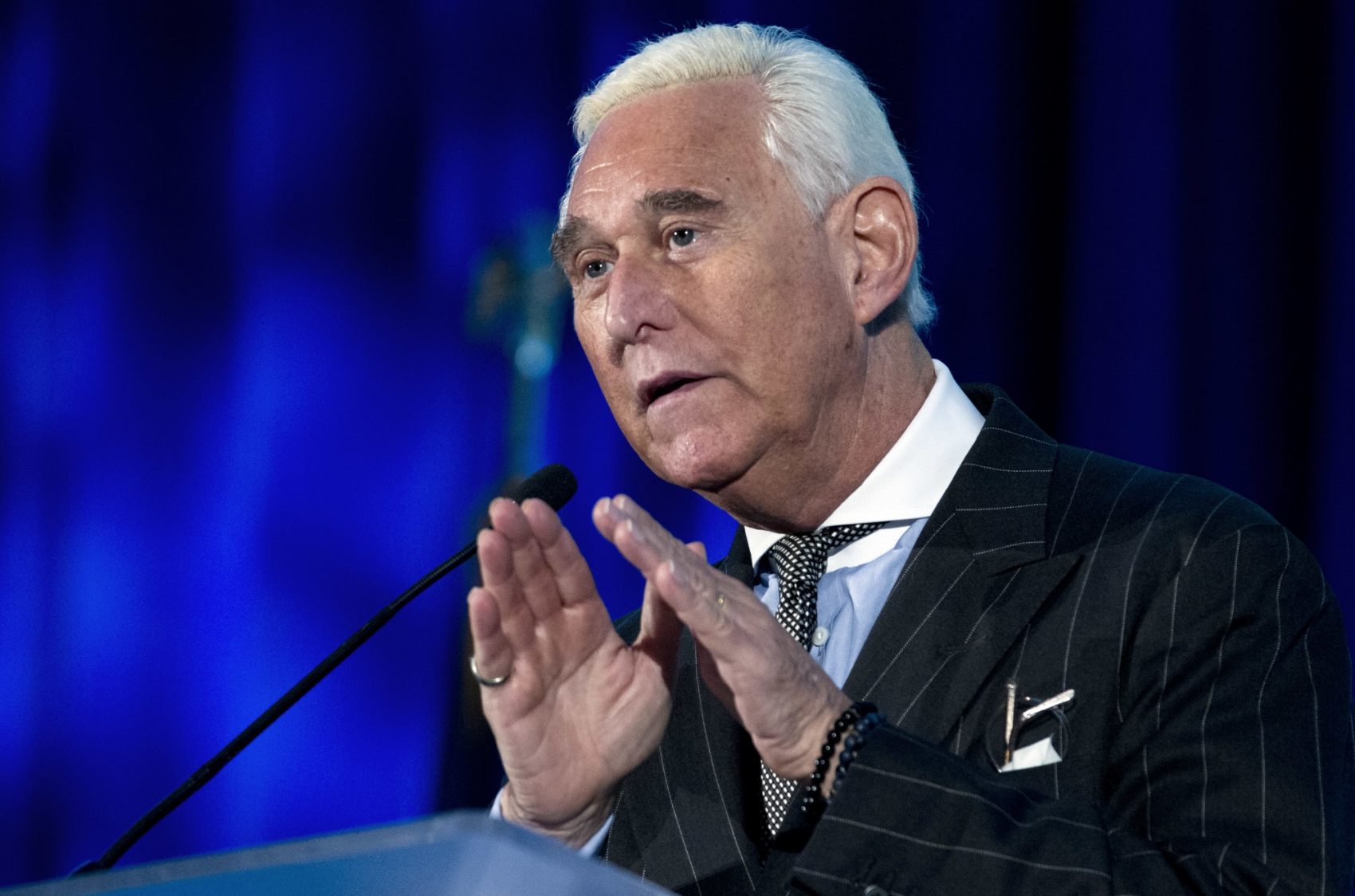 WASHINGTON (AP) — Roger Stone, a longtime friend and ally of President Donald Trump, was found guilty Friday of witness tampering and lying to Congress about his pursuit of Russian-hacked emails damaging to Hillary Clinton’s 2016 election bid.
Stone was convicted of all seven counts in a federal indictment that accused him of lying to Congress, tampering with a witness and obstructing the House investigation into whether the Trump campaign coordinated with Russia to tip the 2016 election. He is the sixth Trump aide or adviser to be convicted of charges brought as part of special counsel Robert Mueller’s Russia investigation. 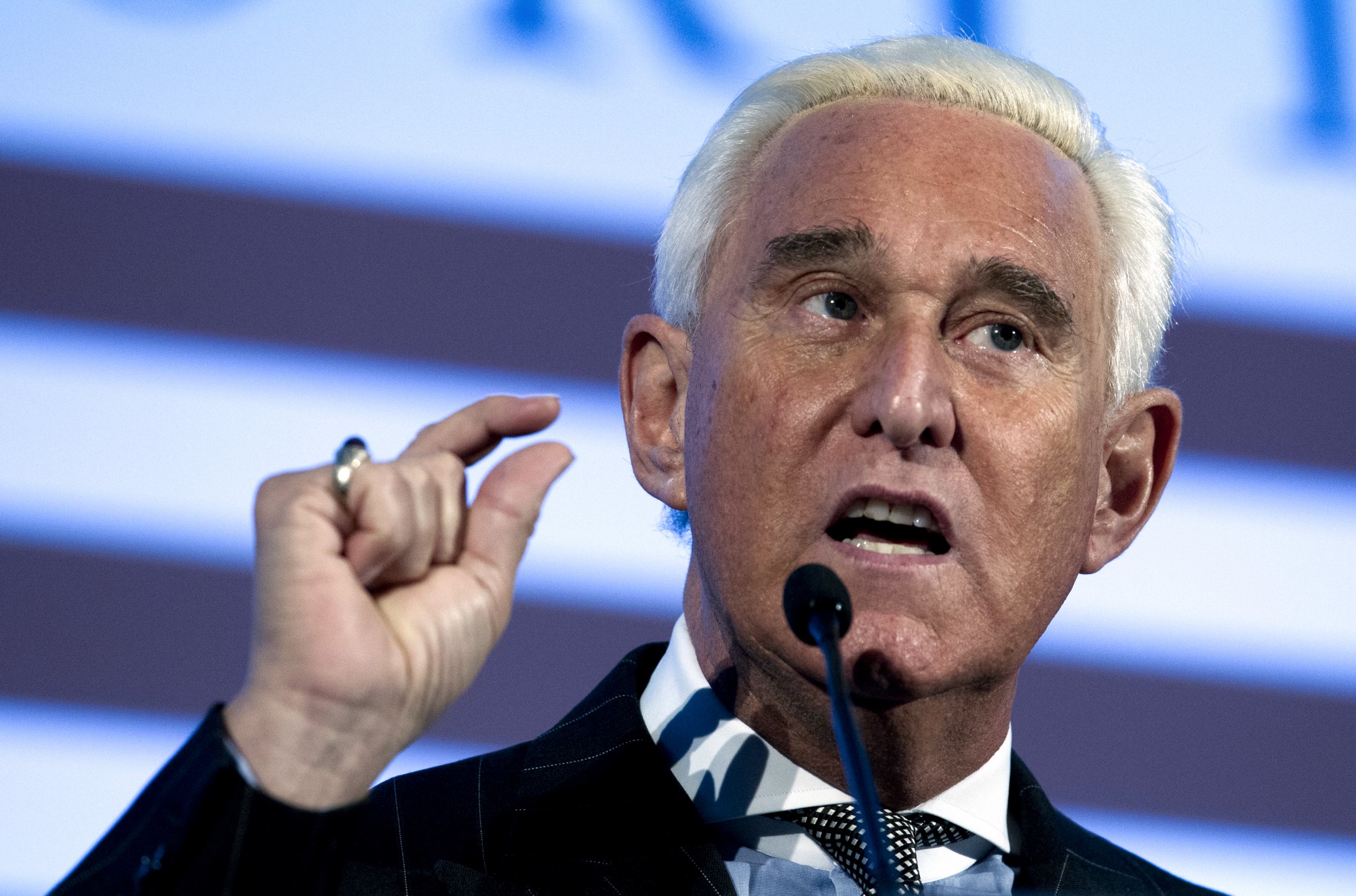 Stone has denied wrongdoing and consistently criticized the case against him as politically motivated. He did not take the stand during the trial and his lawyers did not call any witnesses in his defense.
Stone, 67, showed no visible reaction as the verdict was read aloud, count by count. He’s scheduled to be sentenced on Feb. 6. He could face up to 20 years. Another former Trump campaign aide, Michael Caputo, was removed by the courtroom by security officers after he turned his back on the jury after the verdict was read.
Stone smirked at reporters as he left the courtroom, holding hands with his wife. As he walked out of the courthouse, Stone was asked if he had any comment on the verdict and replied: “none whatsoever” before he hopped into a waiting SUV with his wife.
Trump tweeted minutes after the verdict, calling the conviction “a double standard like never seen before in the history of our Country,” because his frequent nemeses, including Hillary Clinton, former FBI Director James Comey and “including even Mueller himself,” have not been convicted. “Didn’t they lie?”
In a trial that lasted about a week, witnesses highlighted how Trump campaign associates were eager to gather information about emails the U.S. says were hacked by Russia and then provided to the anti-secrecy website WikiLeaks.
Steve Bannon, who served as the campaign’s chief executive, testified during the trial the trial that Stone had boasted about his ties to WikiLeaks and its founder Julian Assange, alerting them to pending new batches of damaging emails. Campaign officials saw Stone as the “access point” to WikiLeaks, he said.
After the verdict was read, prosecutors asked for Stone to be jailed as he awaits sentencing, arguing that he may have violated a judge’s order that prohibits him from communicating with the media about his case. But Judge Amy Berman Jackson rejected that request and said Stone will be subject to same conditions he faced following his arrest, including the gag order.
Throughout the trial, prosecutors used Stone’s own text messages and emails — some of which appeared to contradict his congressional testimony — to lay out their case that he lied to Congress and threatened a witness. Stone did not testify, and his lawyers called no witnesses in his defense.
On Tuesday, a top Trump campaign official, Rick Gates, who was a key cooperator in the Mueller probe, testified that that Stone tried to contact Jared Kushner, Trump’s son-in-law, to “debrief” him about developments on the hacked emails.
Prosecutors alleged Stone lied to Congress about his conversations about WikiLeaks with New York radio host and comedian Randy Credico — who scored an interview with WikiLeaks founder Julian Assange in 2016, when he was avoiding prosecution by sheltering in the Ecuadoran embassy in London — and conservative writer and conspiracy theorist Jerome Corsi.
During the 2016 campaign, Stone had mentioned in interviews and public appearances that he was in contact with Assange through a trusted intermediary and hinted at inside knowledge of WikiLeaks’ plans. But he started pressing Credico to broker a contact, and Credico testified that he told Stone to work through his own intermediary.
Earlier testimony revealed that Stone, while appearing before the House Intelligence Committee, named Credico as his intermediary to Assange and pressured Credico not to contradict him.
After Credico was contacted by Congress, he reached out to Stone, who told him he should “stonewall it” and “plead the fifth,” he testified. Credico also testified during Stone’s trial that Stone repeatedly told him to “do a ‘Frank Pentangeli,’” a reference to a character in “The Godfather: Part II” who lies before Congress.
Prosecutors said Stone also had threatened Credico’s therapy dog, Bianca, saying he was “going to take that dog away from you.”