Chase Young will not play the rest of this season after injuring his right leg and is scheduled to underdog surgery.
Washington coach Ron Rivera confirmed the prognosis for Young on Monday in the wake of the reigning Defensive Rookie of the Year going down during the first half of an upset of defending Super Bowl champion Tampa Bay.
Rivera did not reveal whether Young tore the ACL in his right knee and did not specify what the surgery is for. Washington said Sunday that Young left the game with a knee injury, and Rivera said it was possibly an ACL tear. 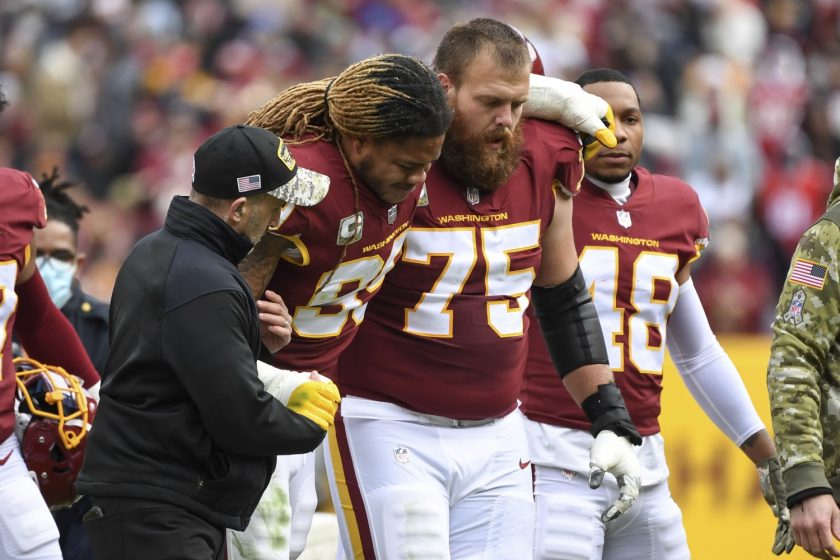 The 2020 No. 2 pick finishes his second NFL season with 1 1/2 sacks. Rookie Shaka Toney is among the pass rushers who will fill in for Young at Carolina and the rest of the year.
“We’re going to rely on some young guys to step up and get opportunities,” Rivera said.
Young got hurt Sunday while trying to get past left tackle Donovan Smith in order to pressure Buccaneers quarterback Tom Brady. He ended up on the grass, wincing and writhing around on the ground for a bit, all the while keeping his right leg straight.
After Young was checked by team trainers, a cart was driven out onto the field. But Young declined to get on and be driven off, instead motioning for teammate Brandon Scherff to give him a hand to help stand up.
Young then headed toward the locker room, draping his arms on the shoulders of two people for support while he limped off. He gave teammates a speech of encouragement at halftime and returned to the sideline on crutches later.