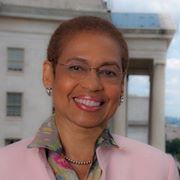 It is a major announcement for supporters in the District for DC Statehood. This morning at 11:30 DC Mayor Muriel Bowser will announce that a House Committee on Oversight and Reform will hold a hearing on DC Statehood. The date set is July 24th.

Mayor Bowser will not be alone for this press conference. Also in attendance is DC Council Chair Phil Mendelson and Delegate Eleanor Holmes Norton.

Under the legislation that Delegate Norton presented the District would have all the rights afforded to the other 50 states. That means the District of Columbia would have two Senators and one member of the House with full voting rights.

Today’s announcement is special because the last time the House held a hearing on this issue was back in 1993. The measure failed following a 277 to 153 vote. For passage, it requires 218 votes in the House.

Most of the candidates running on the Democratic ticket for President support DC statehood.