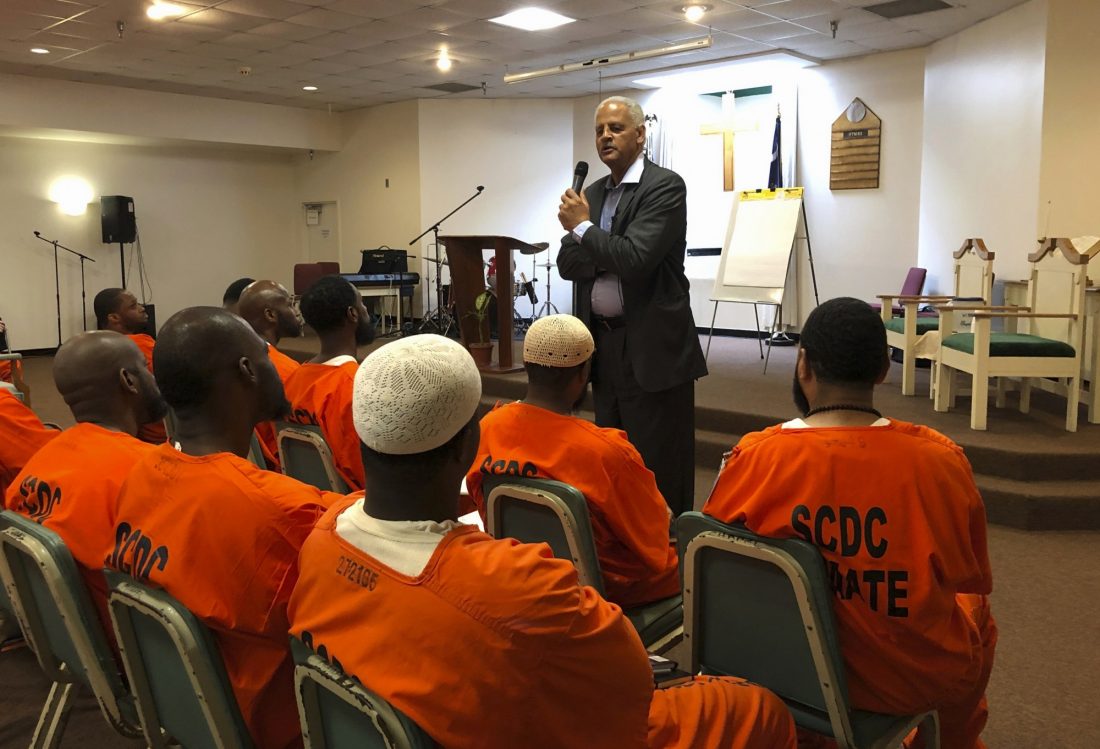 BISHOPVILLE, S.C. (AP) — Before meeting his longtime partner, megastar Oprah Winfrey, Stedman Graham worked as a guard in a Chicago prison — and on Wednesday, for the first time in about 40 years, he entered prison again to speak to inmates about finding your purpose no matter where you are.

Graham spent nearly three hours inside one of South Carolina’s most troubled penitentiaries with about three dozen inmates. He spoke within shouting distance of the wing at maximum security Lee Correctional Institution where seven inmates were killedand 22 others injured during a riot in April 2018.

“If you get out and you don’t know who you are, you have no direction,” Graham said. “You have your freedom, but that will keep you a slave for the rest of your life.” It’s a similar talk to one he makes around the nation about discovering what you love and who you are and respecting yourself and others.

He was the guest of crisis manager and motivational speaker Andre Norman , a former inmate who proposed the Academy of Hope program after hearing about those killed in the riots and 13 others who suffered violent deaths behind state prison walls in 16 months.

He proposed bringing the leaders in prison yards across the state — the alpha males who controlled the culture on their cellblocks — to Lee Correctional and put them in a leadership program.

“Let them read about great leaders. Let them sit among leaders who have done thing outside,” said Norman, who plans to get U.S. Sen. Tim Scott and South Carolina Gov. Henry McMaster to talk to his several-hour long classes.

Norman’s Academy of Hope proposal seemed risky, as authorities blamed gangs and contraband cellphones for the sudden rash of violence, but it appears have met with some success. Over four months there have been no assaults on inmates or staff and no weapons found in the wing near where prisoners filmed bloody bodies on sidewalks 16 months ago.

“Everybody has potential. It’s important we try to help everyone reach it,” Graham said.

Norman ran a gang when he was young and spent several years in prison, but vowed while in solitary confinement he would turn his life around, then help others do the same. In the 20 years since his release, he has given speeches and done crisis management for corporations and Ted Talks on the need for criminal justice and prison reform. But this project in South Carolina is special to him.

“I’ve always wanted to do something like this. There’s not another program like it in the country,” Norman said.

Prisoners in Academy of Hope get some perks. They’re housed in what used to be solitary confinement and get to be by themselves. Several cells upstairs away from the hustle of the common area painted a soft blue and marked off as meditation areas to blow off steam.

A 27-year-old participant named Sylvester came from a prison in Columbia. South Carolina prison policy prohibits him from giving his last name to a reporter.

He’s spent nine years in South Carolina prisons on armed robbery and kidnapping charges and isn’t scheduled for release until 2030.

Now, Sylvester has a collection of copious notes from the past four months. He soaks in the advice and peppers Graham with questions.

“This program is sharpening my tools I will need when I get out,” he says. “It’s going to let me live out my destiny — and I know it isn’t in here.”

Graham told the prisoners that sometimes being truly powerful means knowing when not to use power, and finding themselves so other people don’t define them.

Graham said he knew most of the inmates and staff probably immediately thought of his famous partner when they heard he was coming.

″‘Oprah’s man’ is coming to speak,” Graham said, to a roomful of chuckles. “Y’all are laughing, but you said it. But what I’ve learned is don’t let anyone else define you, because they will always define you as less than them.”