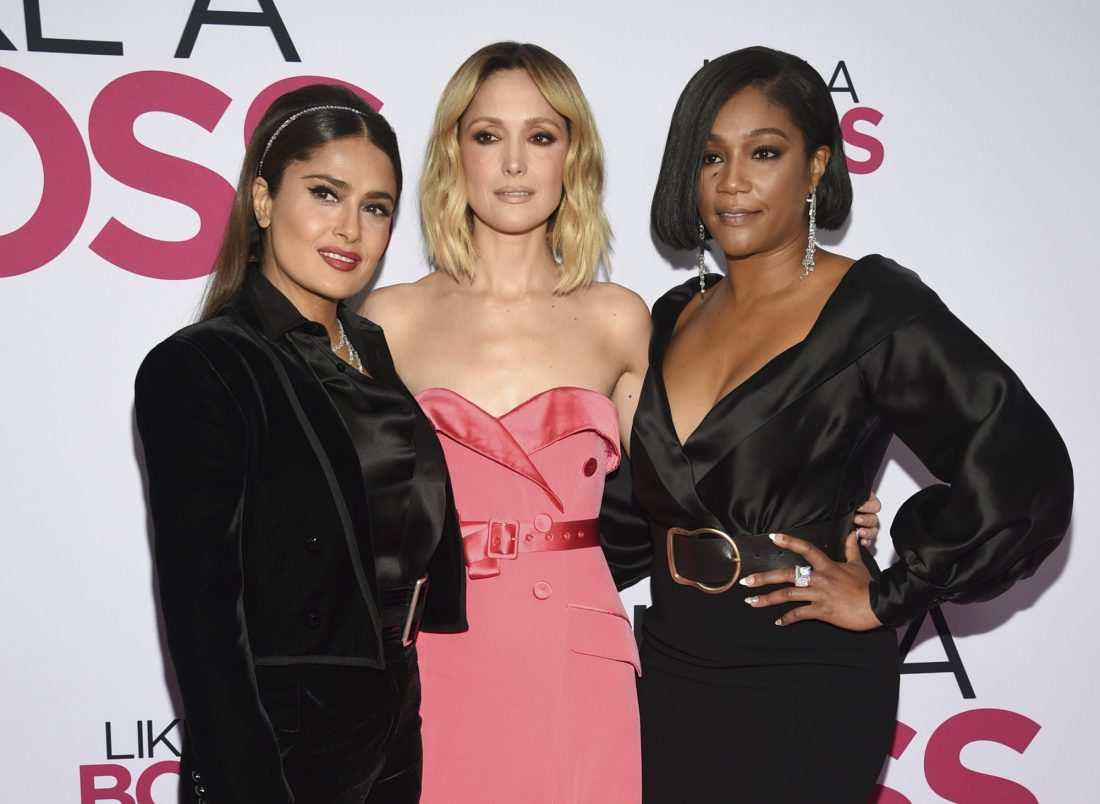 ‘Like A Boss’ Female-Led Cast Leads To New Bonds, Friendship

NEW YORK (AP) — Salma Hayek said the new comedy “Like a Boss” created an opportunity for her to work with more female actors than usual compared to previous films.

Hayek called filming with the predominantly-led female cast that included Rose Byrne and Tiffany Haddish a “breath of fresh air.” She said having the openly gay Billy Porter as part of the roster was also a bonus, calling him “one of us too.”

In “Like a Boss,” Haddish and Byrne play best friends Mia and Mel who created a small cosmetics company together. But when the two friends sell a stake of their business to makeup mogul Claire Luna — played by Hayek — they decide to try to get back control.

Jennifer Coolidge and Natasha Rothwell also appear in the film, which opens in theaters Friday.

Hayek said the cast jelled well with each other, thanks to Haddish opening her home for Sunday dinners.

“Tiffany used to host every Sunday open house for everyone, so we really got that weekend bonding that really helped get through the week,” Hayek said.

Porter agreed. “Those were the things that we looked forward to on those hard, long shooting days,” he said. “It was like, make it to Sunday, we’re gonna be good.”

Hayek said the result was a vibe similar to a 90s movie shoot when actors would hang out more during filming.

“We used to do that a long time ago and lately I had noticed that in the set everybody’s like in the trailer on their phone,” Hayek said. “This movie we really got to spend some time on the weekends between takes, nobody would go to their trailers, we would just all stick together and then I’m very happy because I made some good friends.”

The bonding behind-the-scenes helped Byrne and Haddish — who like their characters — have different personalities.

“Tiff has enough energy for 20 people and I’m low energy, and we met in the middle,” Bryne said. “I think there’s so much comedy in that, in the difference. But we really actually have a lot more in common than you would think.”

Haddish believes they both certainly have comedy in common, though the actress-comedian said Byrne might not realize it.

Maybe Haddish and Byrne’s humorous nature while working with each other rubbed off on Hayek’s character, who was not supposed to be funny at all.

“Originally it was written very straight, not funny and very typical just like a woman pretending to be a man as a boss and very plain,” Hayek said. “I’m very grateful to (director) Miguel Arteta and Paramount (Pictures) that they allowed me to make her crazy and funny.”

Hayek’s character has bright red hair, fake teeth and a vibrant wardrobe, but there was one step she considered, but didn’t take.

“I was gonna inject my face to look really botoxy and with the huge lips but then I chickened out because I had another movie to do afterwards and it was not a good idea,” Hayek said. “It takes a while for that stuff to come out of your system. So, I got these fake, huge teeth that were a little bucked so it makes the lips bigger and I kind of overdid it. But I loved it, it gave me an attitude or something.”